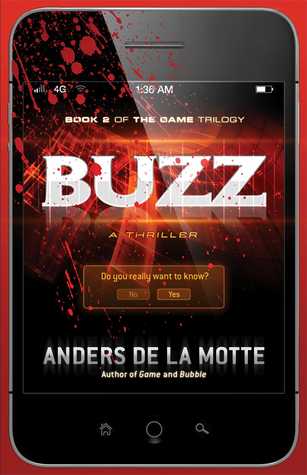 Not too long ago I reviewed the first book, Game, in this Game Trilogy series.  It was a wild ride.  In my review, I asked for a better connection to the story with Rebecca Normén.  We do get a better story with Rebecca, and her involvement with those in the ‘Game’ is stronger, but the book, on a whole, is less satisfying.

We start the book looking in on HP, who hasn’t grown up but grown afraid since his encounters with ‘the game.’  He’s done everything he could to delete any evidence of himself and hide under new identities.  He is in Dubai, where he continues his hedonistic ways have him hooking up for some wild sexual abandon with a wealthy woman who disappears.  HP is the prime suspect and is tortured for information.

Rebecca finally gets a little more action, being in charge of security fo a foreign dignitary, she looks into a crowd, sees a man with a gun and aborts the mission.  No one else sees the man with the gun and she is placed on administrative leave while being investigated.  At the same time, a blogger is posting things about her and her private life, and threatening her.  She uses her off time to investigate this blogger.

Meanwhile HP is freed and, using someone else’s identity, gets a job at a major IT company.  Despite having much skill himself, he manages to become the star player at the company and he uses his status to try to investigate ‘the game.’  Yes…finally… back to the game.  His path crosses with his sister’s in some very inconvenient ways, and one of them manages to see some closure to an issue.

It took two-thirds of the book before it got back into the game, and just as long to become interesting and exciting.  Once there, it moved along quickly and was a nice reminder as to what was exciting about the first book, but until then, it really dragged.  The Dubai section was moderately necessary to set up some later actions, but it took way too much time and too  many unnecessary scenes along the way (did he really need to get that beat up while being interrogated?).

Rebecca’s story was interesting and I let myself be drawn in to it, but as it moved along I kept asking myself… “when is this going to connect with the larger story?”  So too with HP’s story.  I just wanted some hints that we would be getting back to the game, which is what was most intriguing.  I almost gave up, thinking that rather than continue the ‘game’ plot, author De la Motte was taking us on a new journey with these two characters.   A journey that was not nearly as interesting as the ‘game.’

I never truly believed in HP’s prowess at the tech/social media company ArgosEye.  His character is so selfish and lazy (which is precisely what made him a candidate for the game in the first place) that I never bought that he could pass for a computer genius and become the golden boy of the company.

Rebecca’s journey was decidedly more interesting, but the connections to the game were still too tenuous for me.

Author De la Motte spent a good amount of time with little craft bits, such as starting a new point of view by jumping off of the previous point of view.  it was clever once, but got ‘kitschy’ by page 300!  The ‘inside’ look at social media and how corporations are able to manipulate public impressions this way, is interesting.

Once the story got going, it was a great read, but it took too much time to get there.  Yes, I’ll read the third book in the series, and hope for a book full of game action!

Looking for a good book?  This might be necessary if you’re hooked on The Game story, but I can’t recommend this as a stand-alone read.