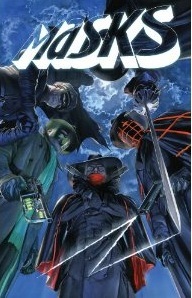 It’s taken me a little bit, but I’ve actually really started to enjoy the variety of graphic novels that I’ve been reviewing lately.

Masks, by author Chris Roberson and artists Alex Ross and Dennis Calero is part superhero, part mystery, part urban noir.  The book is vintage superhero — from a time when the only super power was the Shadow’s ability to cloud men’s minds.  The book brings together an unlikely assortment of vintage, pulp heroes: The Green Hornet and Kato, The Shadow, The Green Lama, Miss Fury, Black Terror, The Spider, Zorro,  and Black Bat.  If you’re not familiar with all these characters, you are not alone.  I have a bit of a penchant for old pulp stories, and other than a passing reference, many of these I were not familiar to me.  However, this definitely does not detract from the book.  Rather, it makes me want more.  I would love to see these vintage heroes more often.

Our set-up: it is the late 1930’s and a master criminal has worked his way into the political scene and has created The Justice Party … his own rogue, vigilante police force.  He claims that justice can’t truly be served when there are lawyers and courts and other ways for the criminals to go free.  It is not lost on this reader that our master villain is doing precisely what our costumed heroes do… mete out justice by their own means.  It all comes down to the viewpoint of those handing out the ‘justice.’

In typical pulp fashion, the take-over of New York City by our shadowy thug is only the beginning.  He’s hoping to take over the state, and then the country.  And of course we presume, ultimately the world.  But our odd menagerie of heroes discovers a secret that the mastermind had been trying to hide from them.

It’s certainly a classic pulp story, complete with fascism, but in the hands of a strong storyteller such as Chris Roberson, it works quite well.  It helps that, sadly, this sort of political thuggery hasn’t gone away.  While reading this book, the national news was full of reports on New Jersey’s Governor, Chris Christie’s political shenanigans with creating lane closures on the George Washington Bridge, and for his ‘shakedown’ of local mayors looking for hurricane relief money.  It’s a little scary that fiction such as this has such strong non-fiction ties to the modern world.

This is a graphic novel, so of course there is artwork here.  Beautiful artwork.  It’s almost impossible to go wrong with the reigning king of comic book art, Alex Ross.  his panels don’t appear to be pen, ink, and computer-generated color art, but complete, multi-paneled paintings.  Ross is only responsible for the first issue of the comic series that is compiled for this graphic novel, as well as a few covers.  The rest of the series is drawn by Dennis Calero.  It would be a difficult task to follow Alex Ross on any series, but Calero holds his own quite well and his art is fitting to the period, noir look for the book.

The ‘down’-side to this book is that there are so many characters with whom most readers are likely not familiar, that we don’t really get to know them.  I’m not deeply aware of the graphic novel/comic book community.  Perhaps each of these characters already have their own titles?  In any event, I just don’t know the Green Lama or Black Bat or Miss Fury, and their inclusion here has me wanting a little more from them.

My advance reading copy included a bonus of the original script for the first issue of the comic, along with panel sketches by Ross.  I always enjoy seeing the creative process behind a finished work, so this was a nice treat.

If there will be a Volume 2 and beyond, count me interested!

Looking for a good book?  This period, noir graphic novel with a gathering of pulp heroes is a wonderful throwback to an era when heroes where men and women of conviction rather than just mutant powers.