THE MAN WITH THE GOLDEN MIND – Tom Vater 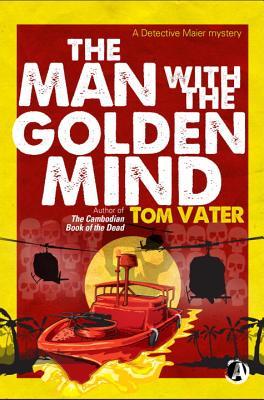 Maier is a German reporter/detective.  He is asked by Julie Rendel to investigate a twenty-five year old murder of her father who was killed at a CIA airbase in Laos.  His journey takes a series of unexpected twists and turns, starting when his client is kidnapped.

This novel is rich with realistic characters, settings so full of energy the reader can practically feel the leaves cutting against bare legs and arms, and a story that is deep and twisting and twisted.  This is a dark mystery/thriller with an intensity that simmers across all facets of the book and reaches a well-timed boil at just the right moments.

Maier is a fascinating, unexpected hero who survives partly on his wits and partly because fortune favors him.  Typically, I don’t care for heroes who need luck to survive, but somehow, when it comes to Maier, it feels right.  It helps that author Tom Vater typically finds a way to explain Maier’s good luck.  Maier operates with a love-able gruffness, always looking for a way out (of trouble) but resigned to his fate when he can’t avoid it.  We like him all the more — find him more human — when these ‘resigned’ moments occur.  Fair warning… this book is not for the faint at heart.  Maier loses body parts and is permanently marked herein, and there is enough death to please Quentin Tarrantino movie fans.  Yet these deaths were never so much about the blood and gore, or even about the shock value of death (is it possible to shock anyone anymore?) — but naturals outcomes of events in a story such as this.  All the players know what they are in for.

Writers often hear the mantra “show, don’t tell,” but author Vater brings this to a new level.  Rather than showing us what is happening, he brings us in to the environment and lets us experience it with the characters in their own world.  A remarkable feat!

The very beginning of the book, with the introduction of the characters and the establishing of the story, was just a little slow.  I don’t know if it would have helped to have read the first book before hand, or not, but if you stick with it, you will be rewarded.

I was first moved by the hallucinations and tattooing scenes.  It felt so real, as if I were in the jungle with Maier, experiencing it with him.  I was also  fully invested with the swimming scene, through murky, trash-filled waters.  When the story moved out of the water, I wanted to step away and shower to rinse the filth off of me.

If you are a reader, such as myself, you probably like to anticipate where the story is going to go, and look for signs of things to come.  Don’t bother.  Vater keeps twisting the expected around and just like a jungle booby-trap, surprises can come at you completely without warning.

I can’t wait to go back and read Tom Vater’s first Detective Maier novel (currently buried within my Kindle) and I’ll eagerly grab whatever adventure next faces the German detective, because, despite the loathsomeness of the adventures he gets in to, I enjoy being spirited away to new places and situations.  After all, I, unlike Maier, can step away from it all.

Looking for a good book? The Man With the Golden Mind will suck you in and take you on a thrilling and exhausting journey through the jungles of Laos and beyond.  It’s a thriller not to be missed.

The Man with the Golden Mind

One comment on “THE MAN WITH THE GOLDEN MIND – Tom Vater”