THE GIRL WHO WAS ON FIRE (MOVIE EDITION) – Leah Wilson, editor 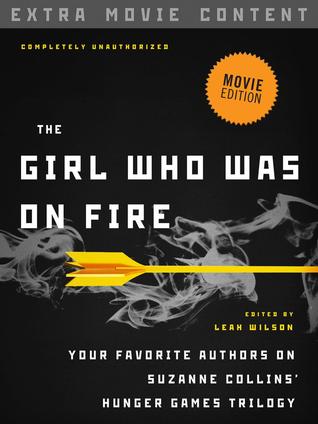 This collection of essays, examining different aspects of Suzanne Collins’ Hunger Games Trilogy tries to be insightful and could have you re-reading the books with a new outlook.

The collection is not likely to be in high demand by the younger set of readers who simply want to enjoy the Hunger Games and to throw themselves into the Panem world, but it could well find a solid readership among the more mature readers who want a little more or who enjoy getting new and different perspectives on this popular series.  This will also find readership among high school English teachers and students who will read the Hunger Games Trilogy in the classroom.

The volume I read included the following essays:

“Why So Hungry for the Hunger Games” by Sarah Rees Brennan
“Team Katniss” by Jannifer Lynn Barnes
“Your Heart is a Weapon the Size of Your Fist” by Mary Borsellino
“Smoke and Mirrors” by Elizabeth M. Rees
“Someone to Watch Over Me” by Lili Wilkinson
“Reality Hunger” by Ned Vizzini
“Panem et Circenses” byCarrie Ryan
“Not So Weird Science” by Cara Lockwood
“Hunger Games Theory” by Diana Peterfreund
“Crime of Fashion” by Terri Clark
“Bent, Shattered, and Mended” by Blythe Woolston
“Did the Third Book Suck?” by Brent Hartinger
“The Politics of Mockingjay” by Sarah Darer Littman
“Gale: Knight, Cowboy, Badass” by Jackson Pearce
“The Inevitable Decline of Decadence” by Adrienne Kress
“Community in the Face of Tyranny” by Bree Despain

The essays were mostly well written, and each had a slightly different perspective, but none of them was so strong as to merit the label “scholarly” — and that being the case, what, exactly, is the purpose of this ‘unauthorized’ book?  The closest we come to an essay that really examines the Hunger Games series with a serious, worthy look is Blythe Woolston’s “Bent, Shattered, and Mended” which examines Post Traumatic Stress Disorder and our Hunger Games characters.  This definitely made me think about our heroes in a different light.

Mostly, however, I found this rather dull.  Essays such as “Did the Third Book Suck?” had nothing of value to add to the reading experience.  While there are gems (such as Woolston’s afore-mentioned essay, and “Crime of Fashion” and “Reality Hunger”) the rest seem to be personal reactions rather than insightful looks.

I enjoy essays and essays about literature can be particularly engaging, but these mostly lacked the passion and insight that makes a book valuable.

Looking for a good book? There are gems in this collection of essays about The Hunger Games Trilogy, but not enough to make it a recommended read.

The Girl Who Was On Fire (Movied Edition): Your Favorite Authors on Suzanne Collins’ Hunger Games Trilogy