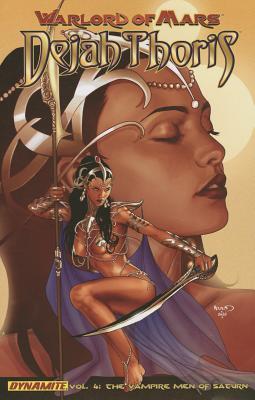 Yesterday I wrote about a graphic novel of The Shadow.  Today, I revisit another character with roots in the great days of the science fiction pulp stories! Dejah Thoris from the Edgar Rice Burrough’s Mars series.  But unlike yesterday’s book, which seemed to have everything going for it — captivating story and strong, moody art — this has neither.

Our title seems straight out of the days of the pulps “The Vampire Men of Saturn” so we know we’re not going to have story of high literary merit.  That’s okay.  The pulps have their place.  Unfortunately, what we have is a story (or set of stories) without any merit.

This book is so bad on so many levels that I don’t know where to begin!

Okay…let me start with the art.  And I use the term ‘art’ loosely.  Yeah…it’s that bad.  Don’t be fooled by the cover you see … the cover artists do a really, really nice job.  I suspect it helps sell this book.  But the story art, which attempts to have a realistic look, is flat — almost cartoon-y.  Some solid inking might have helped here, but not even inks could help the lack of proper dimensions in the human character.  Fore-shortening makes a person look dwarfish.  At times, Dejah’s breasts are drawn simply as two large circles.  It looks like fourth grade art!

And while I’m on the subject… Dejah’s entire attire is … well … let’s say that the only reason this book might sell is as pre-pubescent male fantasy.  From the very first panel in the book, Dejah Thoris is walking around in the snow in a metal-strapped bikini bottom and metal nipple-covers.  She does have a hooded cape (she says it’s fur, which is good…I would otherwise never have guessed) — which she wears behind her shoulders.  But the art is so low end that this nearly naked woman wouldn’t be sexually arousing to the most sexually charged teenager.

So… to the story…   Vampire men of Saturn.  Do I really need to say more?  After wandering naked in the snow, Dejah is captured by a northern hunter.  She escapes, but wanders again, untiol she is magically transported to a ship, taken prisoner by vampires.  I won’t give away what happens , just in case you want to read this, but I can’t recommend this to anyone.

The world is full of talented artists and writers, many of them looking for a chance to show what they can do.  Is it really so hard to find some of them to work on  a ‘legit’ book?

Looking for a good book?  This is not it.

One comment on “WARLORD OF MARS DEJAH THORIS VOLUME 4: THE VAMPIRE MEN OF SATURN – graphic novel”