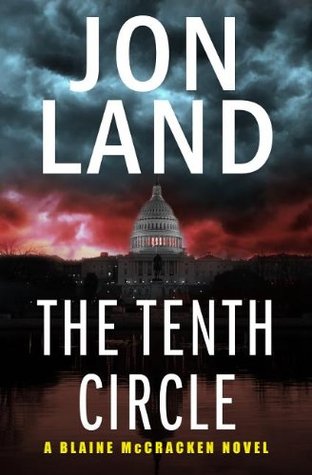 How do you combine 21st Century terrorism with the centuries-old Roanoke “Lost Colony” mystery?  Check out The Tenth Circle by Jon Land to find out the answer.

I’m relatively new to the thriller/mystery genre, so it’s no surprise that I was not previously familiar to the Blaine McCracken series.  This, however, is the eleventh in the series, which should inform any reader that author Jon Land knows how to put a story together.

This starts right off with an action-packed scene that hooked me.  Blaine McCracken, tough old ex-everything-super-spy-type guy, is on a super secret under-cover mission to destroy a super-secret, very powerful nuclear preparation facility in Iran.  But this is really just to get us familiar with how resourceful McCracken can be.  The main story here in the book centers around something a little more close to home.  A zealot preacher, Jeremiah Rule, preaches intolerance, and has developed a remarkable following.  But of course Rule is only a pawn to someone else; someone willing to destroy and kill thousands of Americans in order to start a war against Muslims.

McCracken’s investigation leads to the early Roanoke “Lost Colony” and with the help of his giant “Indian” friend and a pot-smoking scientist, McCracken actually solves this centurys-old mystery first.

Death, destruction, bad-guys who are super-bad, and good guys who are almost super-human, this book covers the gamut of thriller stock needs.  And therein lies the problem.

I loved the opening scene, and was hooked right away with the character and his resourcefulness.  But as the story moves, his resourcefulness falls in to more of soldier-of-luck type character.  McCracken gets out of situations with more luck than skill, despite his tough-guy appearance.  I’m always willing to buy an occassional good fortune move in a book, but too many and I no longer can buy in to the story.

The classical pianist/assassin Zarrin is an example of an un-necessary good-luck character here.  Although she should be gunning for McCracken herself (she accepted a contract on him), it turns out she feels she owes him one (even though he’s unaware of it).  And of course she’s the best assassin around (as well as being the best pianist).  We really don’t need Zarrin in this story.  It’s an added conflict/resource that doesn’t really add to the story, and you have to go out on a limb to accept her reasons for helping McCracken.

Author Land moves the story along with quick, short chapters (100 in all!), but about 1/3 of the way through I was no longer feeling exhilerated at the action as the entire book seemed to have one pace.  Pacing is everything in a thriller, and if it stays the same throughout, we no longer feel the action.

I was hooked early, but I would have liked to have seen a little more control over the story and the characters.  It was almost as though the characters had taken control of the writing … which only muddied the plot.

If I saw another Jon Land or Blaine McCracken book, I would likely give the author and/or character another read.

Looking for a good book?  This has the potential for top-notch thriller, but needs a little restraint.