TO EVERYTHING THAT WAS: SELECTED REMASTERED WORKS (CLASSIC SPACE: 1999) 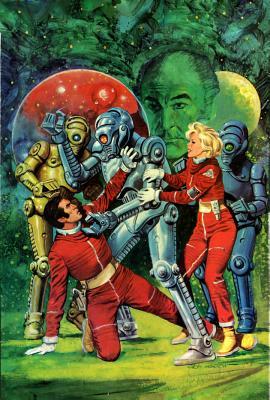 There was an awful lot of hype that hit the airwaves before Space: 1999, the television series, hit local stations.  Star Trek, despite having been off the air for six years, was just beginning to reach a great deal of fame.  So a new sci-fi series, by someone with a track record (U.F.O and Thuderbirds Are Go) was much anticipated.

And of course once you have a television series that’s a moderate success…merchandising will follow (and in many cases, lead the way).  Part of that merchandising is comic books.

The success (if there was such) for the Space: 1999 comics was the (generally) fantastic artwork.  With the talents of Gray Morrow and John Byrne, it’s easy to see why anyone would want to pick up this book.  Sadly, not all the art is up to this standard.  Even in this collection there is some in which I can’t tell the characters apart.

Space: 1999 hasn’t undergone a major revival (that I’m aware of), so what was the motivating factor to ‘remaster’ these comics?  Someone, I suspect had fond memories of the books and had the means to have a go at it.

But while I was reading these books, enjoying the art, I thought to myself, “Wow…I don’t remember these books being so dreadfully boring!  Has age dulled them?”  That was when I looked in to their writing and discovered that ‘remastered’ is another way of saying ‘rewriting’ or ‘imposing my stories on this artwork.’  It’s actually an interesting idea, but only valuable if it’s an improvement.  This is not.

I wouldn’t mind re-reading a collection of old Space: 1999 comics, but this isn’t it.

Two stars, for the art.

Looking for a good book?  Pass this one up and pick up some of the old Charlton comics on eBay.

To Everything That Was: Selected Remastered Works (Classic Space: 1999)