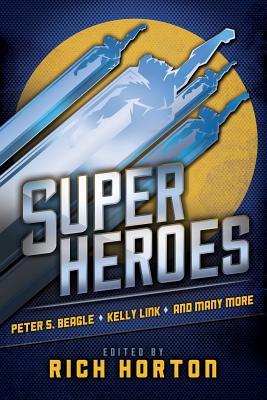 A collection of short stories:

“Sunlight Society” – Margaret Ronald: This isn’t really as much about superheroes as it is about advanced/integrated technology within a person.  Though there does seem to be some superheroes in the society structure surrounding the story.  Basically, a tech-head gains access to a highly fortified place i norder to get rid of a super virus … a virus, we learn, that the tech-head himself wrote.  There, the tech-head downloads all the information on the computers, gaining access to information such as superhero secret identities.  An interesting story that didn’t really go anywhere.  Reads like the first chapter of a novel.

“Secret Identity” — Kelly Link: A sad commentary of a fifteen year old girl who ventures out to meet a man she met on-line through multi-player role playing games.  The plan is to meet at a hotel which is hosting both a superhero convention and a dentist convention.  Which one is Paul Zell…her mystery man?

“The Illustrated Biography of Lord Grimm” — Daryl Gregory: Told from the point of view of a villager in a town, very similar to Latveria…Dr. Doom’s home territory.  Even features a character (Lord Grimm) who is described much like Doom.  Very well written.  Best of the first four stories, easily.

“Tonight We Fly” — Ian McDonald: What happens to an aging supervillian?  This is one such story.

“Wild Card” — Leah Bobet: A seemingly normal criminal claims to be supervillian … there are no super heroes without first a supervillian.  Police discover his secret identity rather easily (he’s a comic book fan) and find his secret hideout (a storage unit).

“Heroic Measures” — Matthew Johnson: How do you let a superhero die when his body super-heroically fights to stay alive?

“The Biggest” — James Patrick Kelly: In the late 1920’s-early 1930’s, Fillbrick van Loon aka “Stiltman” or “the Stilt” or “Big” looks to work for Governor Franklin D. Roosevelt.

“Dr. Death vs. the Vampire” — Aaron Schutz: With the questionable ‘ability’ of killing people by lethal injection and making it look like heart attacks, Dr. Death, and his tenuous connection with a League of Almost-Superheroes, faces off against a vampire.

“Superhero Girl” — Jei D. Marcade: Is his girlfriend a superhero, with a lot of enemies, or a young girl dying of cancer?

“Super Family” — Ian Donald Keeling: The children of superheroes learn the truth about their parents as they realize their own super powers in front of the family arch-nemesis.

“The Strange Desserts of Professor Natale Doom” — Kat Beyer: A young girl with a highly developed ability to work with electronics, engineering, and cooking.

“Downfall” — Joseph Mallozzi: A former supervillain is pulled out of retirement to help the FBI investigate the mysterious death of a grandstanding superhero.

“Dirae” — Peter S. Beagle: Not a human, but a spirit who appears where tragedy is about to happen.

“Grandma” — Carol Emshwiller: A grandchild is left to care for an aging superhero.

“The Los Angeles Women’s Auxiliary Superhero League” — Elana Fortin: Three young women discover their super powers (such as they are) and form a league, complete with agent/promoter.

“Wonjjang and the Madman of Pyonyang” — Gord Sellar: A superhero can still be human, with meddling parents and desires for companionship.

It’s not likely that this book will be picked up by anyone not already interested in superheroes or comic books, or in some other form of this genre, so we can skip the conversation about who this book would be targeted toward.  Clearly it’s for someone just like me…someone who enjoys science fiction/fantasy, comic book superheroes, and short fiction.  Sounds like win-win-win!

As is typical with anthologies, I find that there are some stories I really enjoy and some that I simply can’t get in to.  This collection is no different.  While the first two stories (“Sunlight Society” and “Secret Identity”) were both well written and interesting, but I did wonder if I was really about to read a book about superheroes — these main characters seemed anti-heroic, or touched on superheroes only very briefly.  Definitely seemed an odd beginning.

I really enjoyed “The Illustrated Biography of Lord Grimm.”  While this, too, seemed to deal with superheroes somewhat indirectly, it connected with me as a comics reader.  This story seemed to be told from the point of view of a villager in a poor nation, dealing with the effects of a superhero/supervillian battle.  It’s a brilliant concept, well told.  The fact that this seemed so clearly to be a village under the rule of comics villian Dr. Doom (of Fantastic Four fame), helped with my visualizing the story.

Aging superheroes are not a new idea, and we see a few of them in this collection, but “Heroic Measures” is a slightly different take on the theme.  I don’t want to give anything away, but it looks at medical issues for the super-powered.  Very nice.

Again, I come to a story that is told well (“The Biggest”), and is an interesting read, but ultimately leaves me with a “eh” attitude.  I wanted to like it…I enjoyed the personal aspects, but it just didn’t follow through.

“Dr. Death…” was another in the vein of ‘not quite a superhero’ as I felt the first couple of stories were.  Again…nice writing, well told, but the lack of true super-hero power left me wondering what the criteria of this book was all about.  I understand and appreciate trying to change it up…to not be too traditional…but this one left me a little exhausted.  I was trying to invest myself, but it just wasn’t working.

“Superhero Girl” follows in the same vein…not quite a superhero.  Again, well written, well told, but ….

Finally we come to what one might consider a more traditional superhero story, “Super Family,” and a strong showing at that.  Although possibly a little too much like Pixar’s The Incredibles, this was really a delightful read.  Parents retired from the superhero business, an arch nemesis that won’t quite let them retire, and children who are just discovering their family history and their own powers.  A very nice work.

Kat Beyer’s piece, “Strange Desserts…” is a fun read that might seem a little borderline as to whether or not there’s true superheroism here…but a superhero doesn’t mean super power, although she might have that as well.  This was an oddity that actually fits well in to this collection.

The last five stories are much more traditional with their definitiion of superhero.  “Downfall” brings the supervillian out of retirement, by coersion, and “Grandma” sees an aged superhero cared for by child.  “The Los Angeles…” might be one of my favorites as it takes on an aspect that wasn’t touched on anywhere else…promotion and management…how does a new superhero or super team get the recognition they deserve?  But it also plays with what makes a superhero and super powers.  A very nice take!  “Wonjjang and the Madman…” repeats a theme of superheroes being human and having some of the same troubles that ‘ordinary’ people have, but it does it well and offeres a unique voice by placing the super in a location other than the traditional European-American style city.

Peter S. Beagle’s “Dirae” might be the most original of all the works in the collection (though not necessarily the ‘best’).  More lyrical than the others (almost a poem rather than fiction), this tells of a character (not a human) who appears when a distaster is about to happen and that character works to prevent it.  An interesting read, original as I say, but I was a bit bored with the style.  It might be that for a book on superheroes, I’m charged for something more than poetic lyricism.

Let’s acknowledge that super hero doesn’t mean super power, and not all these characters have super powers, but not all are super heroes (or even super villians) either, and I question their inclusion in this anthology.  There’s also a familiar theme, no longer original, of aging super heroes.  What happens to the super hero who gets old?  The other theme that seems prevalent here is darkness… how disturbing the world is and pathetic life is as a superhero..

While I applaud the efforts of the writers and editor, to try something different and fit within the superhero mold, there was a lack of originality and a tediousness to the collection.  Perhaps there is a reason that superheros don’t fly well off the pages of graphic novels?  Perhaps this is a unique literary character, the superhero, that is really best identified by the art as well as the story?

Looking for a good book? The writing is strong here, but the title and cover art might be misleading.