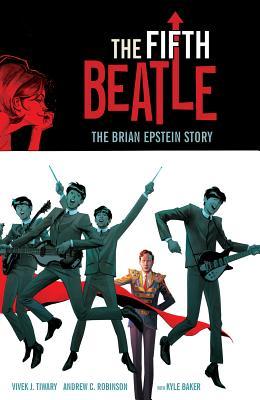 The Beatles in a graphic novel?  Why not?

If you’ve been reading any of my reviews lately, you’ll note that I’ve read a fair number of graphic novels.  It makes sense, if you know me… I’m a closet artist, and love the idea of illustrated books.  But most of my life, growing up, graphic novels hadn’t truly existed, and when they did come to life, it was as a vehicle for comic books.  Superheroes, vigilanties, the usual fare.  The idea of a comic book/graphic novel telling a different kind of story, one that didn’t come in 33-page bytes, and especially something of a biographical kind…well, that still strikes me as unusual.  But i love it.

And I’ve long been a Beatles fan.

I have to admit that I started this by reading only the title, and not the sub-title, and thought I was going to read a graphic novel about Pete Best.  There was a momentary twinge of disappointment, but anything to do with the Beatles…I was all for it.

While a Beatle fan, I’m not deeply knowledgeable in all facets of their history.  I’ve heard the name Brian Epstein associated with them , but wasn’t sure quite how he was connected (unlike George Martin, whose name has become nearly synonymous with the Beatles).  For this very reason, this book was incredibly great — it raised awareness of one person’s strong connection with the Beatles.  In fact, if this story is true, it’s more than a connection…Epstein is the first person responsible for the Beatles’ rise to popularity (this is in no way intended to discount the Beatles’ ability to write and perform music or the afore-mentioned George Martin’s contribution).

What the book reveals about Epstein is quite personal (his homosexuality).  There are some hints that Epstein’s personal assistant had a serious crush on him, which he never recognized.  I can’t help but wonder the reason for this.  It continued to make me wonder where this was going, but never appeared to actually be necessary to the story.

What was quite interesting, however, was the idea that it was through Epstein’s family wealth and his drive to succeed, that led to the beatles’ meteoric rise … his buying thousands, hundreds of thousands of copies of early Beatles records to help get them on the charts; his making huge concessions and bargains with the likes of Ed Sullivan in order to get the Beatles on the show.  I found this information quite fascinating.

So the question that comes to mind, though is: Why as a graphic novel?

A graphic novel doesn’t go in to quite as much depth as a traditional biographical novel might, and I can’t help wondering what I’m missing.  On the other hand, if I saw a book on a shelf about the biography of Brian Epstein, I probably wouldn’t pick it up.  As a graphic novel, it was definitely much more accessible, and what it did do was make me interested enough in the subject matter to want to read more.

Because it’s a graphic novel, clearly the art plays an important role in the book.  The art here was very stylized…not super realistic, not manga, not Cartoon Network cartoony, but a hybrid that works very well.   There were times that I couldn’t tell the difference between which Beatle was which, but for the most part it worked.

Looking for a good book?  This is an interesting vehicle for a biography, but it works.