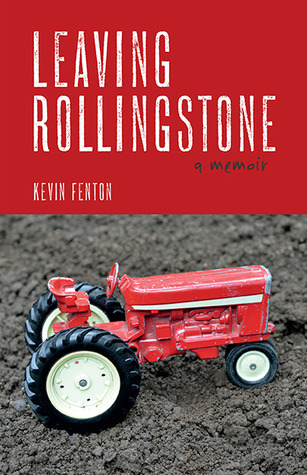 I’ve looked at the genre of memoir for awhile, read more than a few, and wondered why it is that anyone would read a memoir by someone they didn’t know or by someone not ‘famous.’  After reading Leaving Rollingstone, I think I found my answer…to learn a little more about one’s self.  And when you can do so with words so deliciously put together, such as Fenton’s, it makes the self-discovery a joy.

Now I have to admit, despite my preceding paragraph, I do know Kevin, though I definitely learn a little about him (and myself) in this book.

Kevin’s ability to get right to the heart of an emotion or evoke a memory through words is unparalleled.  It is savory.  There was a part of me that wanted to flash read the book — to get through it quickly because I so wanted to read the next portion.  But there was another part of me that only wanted to read a little bit each day, to let his words linger with me because they are so carefully chosen and decidedly well used.  It is poetic, in all the best sense of the word.

The book emcompasses a great deal of Kevin’s life…from early days on the farm in Rollingstone, through a period of alcoholism, to his life in the Twin Cities of Minneapolis/St. Paul and working in advertising.  And while there is a great deal of sticking to a chronological timeline, this is not a chronological biography.  He sets this up, showing how early influences act as pillars to what he will become; each moment defines us, and by looking back, we can see how the present has been shaped.

There is a strong sense of nostalga, and Kevin even writes:

I am nostalgic.  I wrote this memoir because I have a crush on the past.  I love the game Twister; streamlined toasters and ottomans with atomic/cocktail motifs; TV shows such as Laugh-In, The Avengers, Get Smart, and Batman; the originals of the movies Charade and Ocean’s 11; and the music of Dave Brubeck and Stan Getz.

And this book appeals because Kevin isn’t the only one with such a crush.  Those who grew up in the sixties and seventies have all come to a period in their lives when reflection waxes notalgic.  There is a reason so many movies and television shows are sad homages to the past — those in charge have reached that age of reflection and often look to reliving a glorified past.  But you can’t recreate old glory, you can only unintentionally mock it, or you can reflect on it, as Kevin does.

I’ve known Kevin since our high school days.  He has always been one of my favorite poker-playing friends (our poker days were not so much about playing cards but a means to sit with good friends and talk).  Yet I learned much about him through this memoir.  And, as I mentioned earlier, by learning about Kevin, I’ve learned some things about myself and my own history.

Looking for a good book?  This is a beautifully written memoir that evokes strong emotions and memories in all of us.