But right now Steve Victor has a job to do … find Vicki Winters, the beautiful agent with British Intelligence. Vicki has gone missing after she had been assigned to finding out more information about a super secret weapon – a weapon so dangerous and so powerful, only a woman could cope with the knowledge of its effects. But Victor will soon learn about this weapon, first hand, as he becomes the first (unwilling) target.

This book ends with an interesting twist and I can’t help but wonder how we go on to have twelve (or more) sequels and I’m hoping the twist will be addressed in the next book.

I’m still not fond of the term ‘sleaze’ for this kind of book.  It’s adventure satire with a healthy dose of free love sex (this was written in the mid-60’s remember). And it’s downright fun.

Looking for a good book? The 9-Month Caper by Ted Mark is the second book in a series from the 1960’s that satirized the James Bond spy books with a main character even more philandering than Bond. 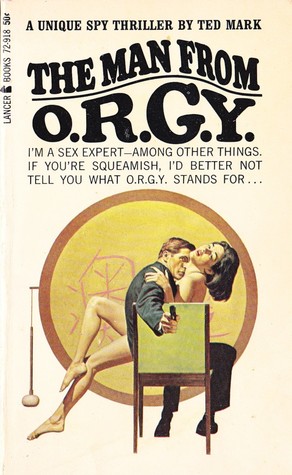 I learned about this book (and the subsequent series) while reading another book about spy fiction. It is colloquially referred to as ‘sleaze fiction’ which I think is a poor moniker as it greatly limits the number of people who might ordinarily read it.  The author, Ted Mark, has more than 20 books published (sixteen alone in the O.R.G.Y. series that I have been able to uncover)  and this series was re-published by a different publisher after Lancer Books went out of business.  Publishers don’t typically take many risks when publishing books, especially not re-publishing a series unless they can see a profit in it, so let’s not be too quick to discount this book, and this series.

Steve Victor is a sex expert.  He’s got a degree from a famous university to prove it. And Victor knows that the best way to fund further stud-y is to apply for grants.  But the best grants don’t fund individuals, so Steve Victor started his research organization known as “O.R.G.Y.” He won’t say what the acronym stands for since it tends to raise eyebrows.

Steve Victor is also a spy, and he’s not one to get caught with his pants down … well, actually he does tend to get caught with his pants down.  In this first adventure, Victor is walking a path from Damascus to Baghdad and Calcutta to Tokyo.  He gets involved with a plot by the Chinese to steal nuclear plans from the Russians.  He can probably save the world, but he can definitely try to pick up some new sex experiences along the way.

This book is a fun flip on the James Bond series.  Where Bond is a spy first and has a number of sexual liaisons during his adventures, Victor is first a sexual explorer who does a little spying along way. This is a shining example of the confrontation of the 1960’s-70’s morals, where the ‘free love’ movement meets with the ‘establishment.’  I can see this being popular to readers of the era.

The plot was just a little bit thin and the sex was slightly more descriptive than I was expecting  – but only slightly more. There is, of course, a great deal of tongue-in-cheek humor throughout as well (this satire along the lines of Catch-22).

I enjoyed this enough to read more in this series.

Looking for a good book? The Man From O.R.G.Y. by Ted Mark is a fun satire of spy novels ala James Bond, with just a little more descriptive sex between the covers.

Much has been written about the man we know as William Shakespeare, but author Jacopo della Quercia combines history with intrigue and puts Shakespeare at the center of some political uprising.

William Shakespeare’s political insight, as well as his commitment to serving the Crown, makes him the perfect spy among the common man, especially when the country is on the verge of a major uprising led by a man Shakespeare comes to know as Guy Fawkes. Shakespeare is invited to be a part of the uprising, making him the perfect set of eyes and ears for the government.

Joining Shakespeare in his undercover activities is fellow playwright Christopher Marlowe. Marlower has tried to leave the dangerous life of a spy, faking his death and living in Italy.

Meanwhile, Shakespeare is asked by the conspirators to write a play with an anti-monarchist message based in Scotland. (Hmm… wonder that could be…)

I’ve read books and stories with Shakespeare as a main character before, but I don’t recall ever reading one with the bard as spy.  This story has a lot of intrigue – it’s a political thriller set in the 1500’s. It’s fun to see the possibility of someone of Shakespeare’s stature, known for his plays and acting, getting directly involved in something that could be from one of his plays.

What I didn’t enjoy so much – and I’m probably alone on this – was the historical footnotes.

Throughout the book there are footnotes detailing a historical event, meant, I presume, to show that indeed things could have happened this way. But I found these distracting. I was following the story well enough and was willing to suspend disbelief based on the storytelling.  Adding the notes  only served to remind me that I was reading fiction within the historical world.

I’m not generally a fan of political thrillers because I tend to find them a little boring. I did find that to be the case here as, at times, the story moved a little too slowly.

The idea of Shakespeare and Marlowe being Tudor era James Bonds is fun but should be a lot more exciting.

Looking for a good book? License to Quill by Jacopo della Quercia is a fun, though at times slow, story putting William Shakespeare in the role of spy, coming between his government and the rousing Guy Fawkes.

I received a digital copy of this book from the publisher through Netgalley, in exchange for an honest review.

With Tempest Raj now a member of the company, Secret Staircase Construction (a company who, as their title suggests, builds mystery-themed, secret rooms inside homes) has finished their first job. Their client now wants to celebrate to kick off her new beginning – new home and new life now that she’s divorced from her cheating ex-husband, famous mystery author Corbin Colt. First up, a mock séance to remove any trace of Corbin from the property, led by Tempest’s friend, Sanjay.

But during that séance, while all those gathered sat in a dark room holding hands, Corbin’s dead body crashes the party, falling across the table in front of everyone.

There were eight people in the room, and they were all holding hands, but all the evidence points to one of them being the murderer.  Suspicions point to Ash, Tempest’s grandfather, because he was the only one with Corbin’s blood on him. Of course, as a doctor, he was also the only one who checked on the body – wherein he acquired the blood. Still, it doesn’t look good, and it appears that Tempest may be Grandpa Ash’s only hope of proving his innocence.

I have reviewed nine Gigi Pandian books in the past nine years and I think she just keeps getting better and better. One of her writing strengths (among many) is in creating a ‘locked room mystery.’  This fits that mold perfectly

The characters are all well defined and unique. Tempest is a wonderful protagonist because like all humans, she’s flawed. The series starts on the premise that Tempest used to have a big magic show in Las Vegas (she’s an illusionist), but something went wrong as a result of sabotage, and now she’s more than a bit shy about performing.  But her love of magic and illusion hasn’t left her, nor has her interest in puzzles, which makes her ideally suited to trying to solve a mystery that otherwise seems unsolvable (a locked room mystery).

The mystery is really solid – it does seem like a pretty impossible situation (how does a man suddenly appear dead in the middle of a closed room where everyone is literally connected to one another?) – but I do have to say that the ultimate resolution is just a little bit of a let-down. But only a little bit. And fortunately, while this is a mystery, it’s really a story about these people and their relationships and it’s these relationships that keep us wanting to read more of their stories.

Looking for a good book? The Raven Thief by Gigi Pandian is another top-notch story that builds on interesting characters and seemingly impossible murders.