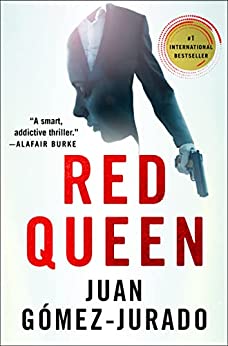 Antonia Scott does not like to be bothered.  When she hears footsteps coming up her attic stairs, she knows, just knows, that someone is coming for her.  But why? She’s never been a police officer. She’s never worn a badge or carried a weapon. She’s never been a lawyer or a judge.  But Antonia Scott has solved dozens of crimes. She has a gifted forensic mind, and her ability to reconstruct crimes and solve baffling murders is legendary. But she’s been a recluse since a personal tragedy struck.

The footsteps coming to get Antonia belong to Jon Gutierrez, a good but currently disgraced cop who got caught planting evidence. Officially he’s removed from duty, but he’s now working for a secret organization that works in the shadows to solve some of the most violent crimes in the EU. Jon’s first task is to convince Antonia to work with him. That might be the easy part.

The pair will then be asked to solve a series of ritualistic killings (which started with the discovery of a teenage boy of a wealthy family drained of every last ounce of blood). The high-profile daughter of one of the richest men in Spain has been kidnapped and there’s reason to believe she may be next for the ritual murder.  Her last, best hope of being found is Antonia and Jon.

I’ve read a fair amount of dark mysteries/thrillers from Scandinavian authors, but I’ve read virtually nothing translated from the rest of the EU – here, specifically, Spain.

Author Juan Gómez-Jurado does a really nice job of setting up our characters at the start of the book while still keeping us interested the larger story. It does feel as though we spend a fair amount of time on the two main characters – getting some background on them and watching them get familiar with one another – as though Gómez-Jurado is laying the foundation for a series of books.

A book (and series) like this is generally driven by the characters and in Jon and Antonia we have two very different but compatible (mostly compatible because they have the same goal) protagonists.  Antonia can ‘see’ behind the crimes and Jon has the ability to follow her lead and finish the task. Both have distinct personalities, which on the surface don’t appear to mesh well but of course will mostly work quite well (‘mostly’ because we’ll need something to keep them both on edge a bit).

I really enjoyed Antonia’s trait of knowing obscure foreign words – words which she uses to perfectly describe a situation or scene (“Mångata. In Swedish, this is the reflection the moon makes as it traces a path across the water.”).

This is a detective thriller, and Antonia and Jon are called to solve something pretty horrific. To that end, this is NOT a cozy mystery. In fact this would be the exact opposite.  It is dark and brutal and gruesome. We do get the POV of the captive and her constant fears at what, worse, is yet to come.

Looking for a good book?  If you like dark detective/thrillers, be sure to get in here on book #1 of a series out of Spain, Red Queen by Juan Gómez-Jurado.