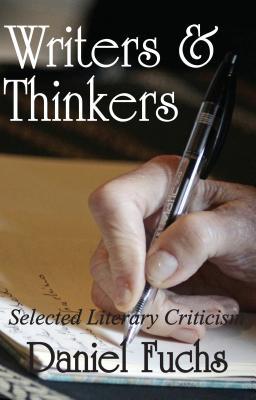 Well … this was … interesting.

When I was in college (some 40 years ago!) I really enjoyed reading literary criticism. Researching an author and/or a book and writing papers was one of my favorite parts of getting an English degree (minor).  When I saw this book, Writers & Thinkers by Daniel Fuchs, those happy memories came flooding back and I wanted to relive some of that time. One of my favorite authors from that period, Bernard Malamud, is featured in a couple of the essays here and that definitely was the deciding factor in my wanting to give this a read.

And what I came away with was … does anyone read literary criticism for anything other than writing papers for school?

Fuchs addresses this to some degree in his Preface (an essay in itself):

Literary critics are sometimes asked to explain the kind of criticism they write. This is one such occasion. Though I have never been particularly concerned with methodology, my interest is in the character of the writer, in the illumination of the salient details of what he wrote, and in related problems of cultural definition. These essays are written in a Morningside Heights style.

This kind of criticism has had two tendencies, public and scholarly, with some of the critics in between or, as the case may be, moving with relative ease from one to another. The New York intellectuals in their heyday of the forties, fifties, and first half of the sixties were later thought of as public intellectuals, meaning, for one thing, that they addressed public issues that came within their intellectual purview.

The essays in this book, though primarily extrinsic, give due attention to artistic particularity. They are detailed but not formalist, focusing rather on how the particulars illustrate cultural and psychological realities. They are, in this sense, thematic. They are cultural criticism with no political program. … Writers and Thinkers is a collection of essays, but given the alternative space of a book on a single subject, I think that establishing the detailed relation of significant pattern to the primary ground of personal and cultural motive is even more important. D.J. Enright, in a Times Literary Supplement review of my Bellow book, said that my only fault as a critic was that I explained too much. Though I side with cultural criticism, I have often observed in it a shortcoming, a sort of condescension in actually referring to the particulars of an art work, or even to the work at all. To me, the critic is somewhat analogous to the conductor of an orchestra: the reader often responds to the critic’s ability to illuminate detail, to generate the drama of particulars. To this extent I am sympathetic to the close reading or practical criticism enterprise.

So, to Fuchs, to get the most of our reading experience, we should be guided by a ‘conductor’ to make sure we ‘get’ what we’re supposed to?

This makes some sense, and it’s what my university professors were teaching us … how to read literature – how to understand what we were reading and to think critically on our own.  Do we really need someone else’s voice – specifically Daniel Fuchs in this case – telling us what to look for and what might ‘really’ be going on? For me, the answer is ‘no.’

It doesn’t help that even here in these critical essays we’re very clearly getting an opinion and we have to take that into consideration.

Malamud is writing about failure in a time when America is moving toward “success.” (Of course, success brings failures of its own and failure may be a form of redemption.). … It is as if Malamud missed the boat, missed the great American Jewish turn to affluence for better or worse that Bellow’s vibrant prose records so brilliantly. Too often Malamud sings in the veynedich (tearful) cantorial style. It is moving but somewhat outdated. Bellow moves on to the wider energetics of contemporary American harmonics, thriving in the dialectical air between assonance and dissonance. The Bellarosa Connection is a case in point. For Malamud the Holocaust evokes the tearful past. Bellow brings the Holocaust into the pleasure-ridden present.

Perhaps it’s because I am much more of a fan of Malamud’s work than Bellow’s, but I found this to be humorous – almost outrageous. First, Fuchs counters the first sentence with his parenthetical response, and then doesn’t want to go too far and actually make a strong statement but follows it with “It is as if…”.

Were I still in school and writing papers on Malamud or Bellow or Hemingway I might use this as a resource for quoting in my paper, but given that this is criticism of books and authors that are no longer topping the book sales charts, its value is limited.  I’d like to see some new literary criticism on authors that are still connecting with readers with new books.  Where is the Anne Tyler criticism?  Margaret Atwood? Stephen King? Seanan McGuire?

There is no question that there are books from the 1920’s, 30’s, 40’s, 50’s, etc that are still relevant and important to today’s readers.  But are new criticisms of these books equally relevant? That is, I suppose, up to each of us as readers.

Looking for a good book? Writers & Thinkers by Daniel Fuchs is a collection of essays by the author. Though I have, in the past, enjoyed reading literary criticisms of authors I admire, I failed to find relevance for these essays.