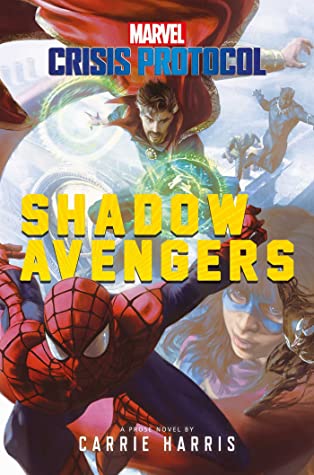 Doctor Strange has been preparing for the arrival of Dormammu – a being who rule the Dark Dimension – and formed the Shadow Avengers as a small, super-hero army to do battle with the dark entity and his supporters when the time comes. The team consists of Ms. Marvel, Spider-Man, Luke Cage, and the Black Panther.

The reluctant, anti-hero Venom is one of the first to have an encounter when he sees Loki (under Dormammu’s control) dumping toxic waste into the city water supply from an Oscorp vehicle. There’s a bit of a battle and then Loki disappears into a magically created portal.

The showdown is nigh and our newly formed group of superheroes, used to working alone, will have to find a way to work and trust one another to save the world from the Dread Sorcerer Dormammu.

This is a children’s book … or a middle-grade reader, at least.   It’s written ‘down’ just a little. This is the sort of book one expects to see in one of those school book order flyers (I loved when we got those!) or featured on an endcap of a library shelf taking advantage of the timeliness of the book and the hope that the subject will keep youngsters reading.  There’s nothing wrong with this thought, but this is taken to an extreme, trying to appeal to all potential readers and not just those who already love these movies (and just who would that be?).

The book spends too much time in idle chit chat – Spiderman and Ms Marvel getting to know each other for an entire chapter, for instance. This doesn’t advance the story or the plot, but it does fill in some gaps if you don’t know who they are.

Of course if you know who they are already, it really drags the story down. This should be as fast-paced as the movies with a breather for some Spidey sarcasm now and then.  Superheroes! World-consuming villainous plans! Evil being from another dimension! Must stop! Must protect!  And what we get are a lot of conversations between the superheroes as they get to know one another.

It’s comic-related and it’s connected to the Marvel Cinematic Universe, so these books will sell, and sell well. I only wish we were hooking young readers on stories that engage.

Looking for a good book? Shadow Avengers by Carrie Harris does provide readers with another opportunity to read the further adventures of some favorite comic book characters, but it’s not particularly thrilling despite all the action going on.