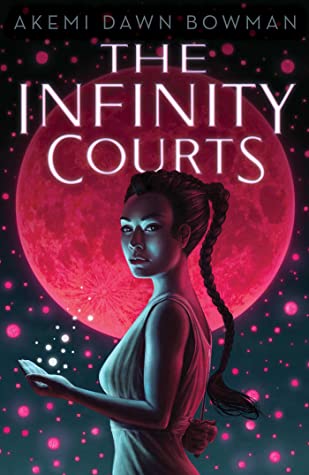 Nami Miyamoto has just graduated from high school and has a great future ahead of her.  Now she’s on her way to a graduation party to celebrate the milestone with her friends when she is murdered in a convenience store. With that, Nami learns what people have wondered about for centuries … what happens to the soul after death?

Nami wakes up in a place called Infinity – where the consciousness goes when the body dies. But Infinity is not the pastoral oasis we sometimes call ‘heaven.’ Nami learns that a virtual assistant used widely by the living, named Ophelia, has integrated into Infinity. It has declared herself Queen of Infinity and is forcing the human souls to be servants to her desires, much the way she has been to the living bodies.

But Ophelia’s ultimate goal is to eradicate all human life and she’s getting closer and closer to making that work.

Nami connects with some Infinity rebels who are looking to defeat Ophelia and free the humans she has imprisoned.

This was a really fun YA that tosses in a little bit of everything.

Normally I don’t care for the high angst drama of classic YA, and there most definitely is a fair amount of that here, but author Akemi Dawn Bowman brings in enough story that it isn’t all about Nami’s emotions.  I admit I wanted to pass over the pages full of ‘sighs,’ but for the most part I was really interested in Nami and in this afterlife world. Bowman made it feel very real and there’s a certain readership that really loves the hard YA emotional fiction and I think there’s enough of that to appeal to that audience as well.

This is a really nice balance of YA, fantasy, tech-gone-wild sci-fi, and world-building.

Looking for a good book? If you like your YA with a slice of sci-fi/fantasy, Akemi Dawn Bowman’s The Infinity Courts is a book you should read.