Not too long back, I re-read and reviewed the first original Star Trek novel, Spock Must Die! by James Blish, who was a recognized name to us Star Trek fans for his book adaptations of the original episodes. For those of us who couldn’t get enough Trek in our lives (remember, kids … no streaming television to watch whatever you wanted, whenever you wanted, and VCRs were cumbersome beasts owned only by a few schools) this was a joyous occasion.  Suddenly, with the publication of Spock, Messiah! (was an exclamation mark going to be required in all Star Trek novels?), co-authored by two men whose names were not familiar to Star Trek or science fiction readers – Theodore R. Cogswell and Charles A. Spano, Jr. Suddenly the Trek world opened up. There could be any number of new stories featuring our intrepid Captain Kirk and his crew, and anyone could be writing them.
Spock, Messiah! focuses on Mister Spock, of course, who, after heading down to a planet (Kyros) as part of an away team, is the victim of an experiment which turns our rational, logical Mr. Spock into believing that he is the planet’s messiah, wherein he begins a holy war against all non-believers throughout the planet. Can Kirk stop his first officer from killing millions by appealing to his logic?  Or appealing to his humanity? Will Kirk be forced to kill the most valuable first officer in Starfleet – and his closest friend?

I enjoyed this re-read and as with many of these early Star Trek books, I was as much transported to memories of my youth as I was invested in this Trek story.

One of the first things I noticed was that Cogswell and Spano appeared to have a better grasp on the characters than Blish did.  This is certainly not a surprise as Cogswell and Spano likely based their story on the actual episodes, while Blish was working from scripts (scripts that sometimes changed greatly before final episode editing).

The story is fairly direct without any subplots mucking it up, and while the characters felt much more like those we see on television, the very general idea of Spock going off on his own while on a mission, being nabbed and transformed into someone with a god complex, strikes me as a bit of a stretch, even for Star Trek.  Maybe.

But probably the reaction I felt the most back when I first read this book, and I remember it quite clearly on re-reading the book, was: are all books going to center around Spock? I understand his appeal on many levels, but, William Shatner’s ego aside, the series was an ensemble work that told great stories and I hoped that was what we would find in the books as well. At the time, we could only wait and hope … time would tell.

Looking for a good book? Spock, Messiah! by Theodore R. Cogswell and Charles A. Spano, Jr. was only the second Star Trek novel ever release and does a nice job of capturing the characters as we know them from the show. 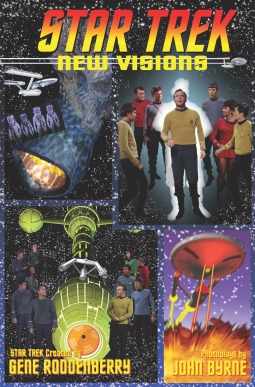 Last summer I read and reviewed the first volume in author/artist John Byrne’s Star Trek: New Visions graphic novel series.  It is set up like a comic book/graphic novel but using manipulated photos from the Star Trek series (like the old ‘Fotonovel’ books) to tell new stories.

In this collection, Byrne stretches his character-creating, giving us some familiar faces (familiar if you’re a fan of the show), though not always the more recognizable guests, as well as creating some new characters.  I liked that Byrne sticks with the 1960’s style. In the short “Robot” our guest is wearing a very ‘mod’ outfit that would easily have been in fashion on earth circa 1969.

Something Byrne is able to do is to give us aliens that are truly alien in appearance.  We see this nicely in “Cry Vengeance” in which Kirk encounters a very alien race that has also had a run-in with the Doomsday Machine.

There’s a Harry Mudd story and Tribble story, but my favorite is “A Scent of Ghosts” in which we get some throw-back flashbacks to the Captain Pike era. But in the current, Kirk era, Pike’s Number One is now a Commodore.

This volume ends with a tease that I found exciting.  The last panel has Kirk walking on to the bridge that resembles the animated series, complete with animated characters. I think that would be an excited take on this New Voyages series.

This volume has the following stories:

“Made out of Mudd”

“A Scent of Ghosts”

“Eye of the Beholder”

Looking for a good book? If you are a Star Trek fan you really should check out John Byrne’s Star Trek: New Visions (Volume 2) graphic novel for some new stories with familiar faces.