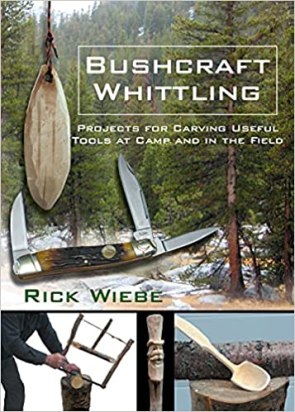 Back in the 1970’s there were a series of books published called The Foxfire Books.  These were somewhat surprising bestsellers which, to quote the publisher “brought Appalachia’s philosophy of simple living to hundreds of thousands of readers.” I still have a few volumes of these on my shelf, and the books are still available for purchase (which is pretty good after 40 years!).

I mention them because Rick Wiebe’s Bushcraft Whittling appeals on the same, though simpler, level. ‘Simpler’ because it’s only focused on whittling/carving.

My grandfather was an accomplished carver and I’ve done some carving of my own, but generally with very specific carving knives. What appealed to me about this book is the focus on using the tools at hand – specifically a standard pocket knife and an axe.

I really liked the idea of whittling a spoon and/or a fork. I can see this being useful for those longer hiking or canoeing trips where you don’t want to pack a whole lot to have to carry.  Carve what you need to eat, then toss it on a fire and do the same thing in another location.

Something I had not thought about was carving with an axe. When I’m out camping, I’ve always got a hatchet and axe with me. I think I’d like to try one of Wiebe’s axe carvings next time I’m out.

There is a section on carving walking sticks and on making toys.  Both of these chapters feature some pretty standard carving activities – ideas and methods that can be found in just about any beginning woodcarving book or magazine. I personally would have liked something a little more unique, but I do understand that the book is presenting some very basics for a general audience.

Along those same lines, Wiebe spends an entire chapter on sharpening blades. Again, I understand the desire to present to a very general audience but I’m of a mind that someone interesting in a book about whittling maybe already has a decent grasp of keeping sharp blades.

In general, I enjoyed this book and found a few things I’d like to try the next time I’m camping (if that happens), but the title doesn’t suggest this is a basic/beginner book and it probably should.

Looking for a good book? Bushcraft Whittling by Rick Wiebe is a clever idea and targeted toward beginners.

Bushcraft Whittling: Projects for Carving Useful Tools at Camp and in the Field