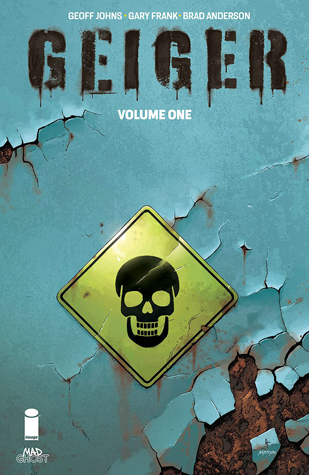 I requested, received, and read a handful of graphic novels recently, and while I will be giving five stars to another one (I don’t want to go into the lengthy explanation as to how my reviews are scheduled to be published), Geiger, by Geoff Johns, Gary Frank, and Brad Anderson is my favorite of the bunch.

Years after a nuclear war turned the planet into a hellish wasteland, only one man is able to live outside without wearing a protective suit against the radiation. He is a legend … or maybe only a myth. He is referred to as Joe Glow or The Meltdown Man. But he’s not a myth.  He is real and his name is Geiger.

Geiger, who was an average human before the radiation rained down, has spent his life since the devastation waiting outside the bunker where his wife and children took refuge when he was caught by the blast. He is waiting for the time when they can come out of the bunker.

Because Geiger can survive outside and he’ll vigorously defend the area surrounding his bunker, this has led to some anxious rivalry.  In Las Vegas, a self-proclaimed King is trying to expand his realm and he needs Geiger out of the way.

The King has a map, leading to a safe haven, but he can’t get past Geiger. That map is stolen by one of the King’s workers.  She is planning to take her children and escape the clutches of the King as his kingdom. She is killed in the escape attempt, but her children manage to get away where they run in to Geiger – the terrifying legend. The children, who remind him of his own children trapped in the bunker, need Geiger’s help to survive in the post-apocalyptic world.

The artwork here is really top-notch. Gary Frank (with Brad Anderson colors) gives us just the right touch of realism with a sense of foreboding surrounding Geiger, and angst and claustrophobia when we’re in the King’s world. The artwork does precisely what it should – it complements the story. …and this story is powerful.

We’re dealing with a post-apocalyptic world and this theme is pretty rampant in today’s market, but author Geoff Johns rises above the abundance of post-apocalyptic stories by using this setting to provide a tone and establish location and time and making this a story about people.

There are a couple of different storylines running through here (Geiger’s, the King’s, the children’s) and I found myself constantly wanting to stay abreast of all the different characters and what was happening. Johns navigates this quiet well, bringing the various stories together with appropriate timing.

This is a graphic novel put together from an on-going comic book series so the ending of this graphic novel is a bit open-ended. That said, however, we don’t feel cheated. There is a story with definable actions and storyline(s) here and the break in this book seems quite natural.

Looking for a good book?  Geiger, Volume One is a graphic novel by Geoff Johns, Gary Frank, and Brad Anderson and is an exciting, post-apocalyptic story about people and runs the gamut of human emotions.