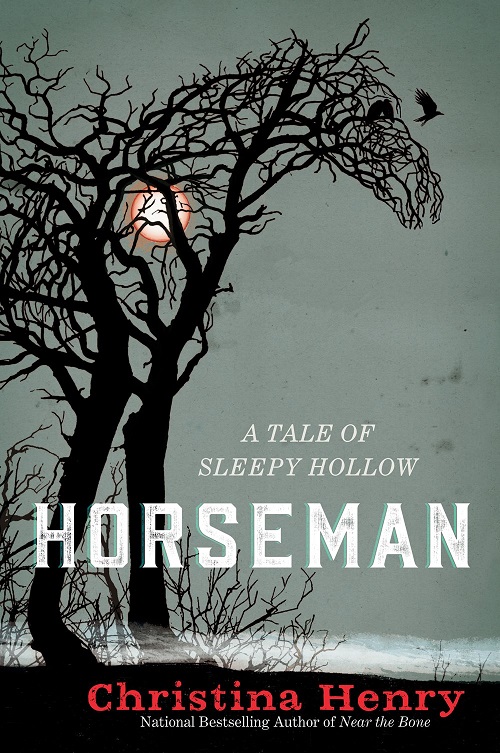 The Headless Horseman story is just that … a story, right? Everyone in Sleepy Hollow knows the story, but no one actually believes it. Even Brom Bones who claims to have been there when the Horseman chased the skinny Crane fellow out of town, no longer really believes in the old story.

Now, some two decades after the supposed events when the Horseman scared off ol’ Ichabod, fourteen year old Ben van Brunt and some of the Sleepy Hollow boys often spend their playtime reenacting the Horseman exploits. When the youths discover the headless body of a child in the woods near town they start to question the stories and whether or not they may actually be real.

I’ve really come to look forward to each new Christina Henry book. Her dark takes on established stories and legends have really been thrilling and well-told. When I saw Horseman I thought it was perfectly natural for Henry to take a new look at The Legend of Sleepy Hollow story, and then I wondered how she could take a dark look at a story that is already pretty dark to begin with.

This book is a departure for Henry in that it isn’t a re-telling of a legend or an alternate telling of an old story or a different viewpoint of a familiar legend. Horseman takes a youthful look at a story which, if true, is pretty darned frightening.

Henry plays with time in an interesting way here.  The story is told in first-person, present tense, but it’s twenty years after an inciting incident and it’s still a couple hundred years in our past. The twenty years works well as it’s more than a lifetime for our narrator, Ben, but not so long that there aren’t people in town who remember when the Headless Horseman went on his wild ride. In fact Ben’s uncle is Brom Bones – the man who claims to have witness the event.

But the book is less about the Horseman (if there is one) and more about Ben van Brunt. Ben, you see, is a girl. At least by the standards of the day, Ben would be considered a girl and she’s got more than one old man looking to make her a bride. But Ben vehemently fights against the idea of being a girl. In today’s world, Ben would be non-binary or gender neutral.

Because this is still rather uncommon (at least I haven’t read many books with non-binary/gender neutral characters) the book becomes about Ben’s gender identity without addressing it head-on. We don’t know how Ben’s friends or family feel about Ben’s taking on the male persona. We don’t know why Ben feels this way (and to be fair, that may be too big a question to put forth). What is Ben’s future if not as a bride (remember, this is 1700’s rural New York).And oh yeah, there may be a horseman out there killing people.  Is that important?

For me, this was one of the weakest of Christina Henry’s books. The Headless Horseman tale is really more of a bookend to a story about a girl named Ben.

Henry tries to wrap it up and bring the story back to the more famous tale with which we are familiar, but it tends to feel a bit tacked on.

Looking for a good book? Author Christina Henry has got a lot of really great books and I’d happily recommend most of them to any reader, but Horseman is one to skip for now.

Horseman: A Tale of Sleep Hollow