ROCK AND ROLL WILL SAVE YOUR LIFE – Steve Almond 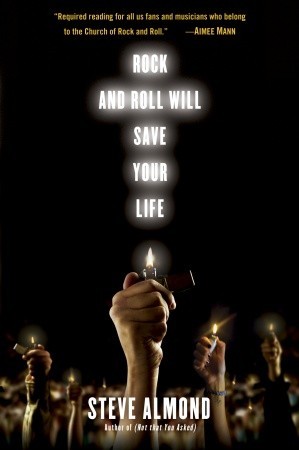 It’s no secret that I’m a fan of Steve Almond’s work.  I religiously buy everything he publishes, and even have purchased anthologies with strange themes just to read an Almond story.  And it was all I could do to not behave like a Raving Fan Boy when he was speaking at my local bookstore a year or so back.

What is my attraction to Almond’s work?  Well, his writing first and foremost.  He’s got a smooth, conversational way with words – conversational for those who can speak in more than Twitter codes. But I think it’s more than just his writing style.  There are many writers whose style or way with words I greatly admire.  Almond also manages to have the same interests or concerns or ideals that I gave.

Whether it’s being a Candyfreak, or having a grudge against football while still being a fan of the sport, or being a Drooling Fanatic for music and musicians … Steve Almond GETS me! It’s like we’re the same person (except that he’s younger, likes harder rock music, a Jew, and has probably gotten laid with a lot more women than I have [if he’s not exaggerating in his writing]).

Okay…so Almond and I are not on the same page in regards to the style of music and the musicians, but the intent and feeling of being a Drooling Fanatic is the same.  My wife still rolls her eyes at the time we drive four hours (and stayed overnight) so that I could see a now very old 1950’s/60’s folk musician I’ve admired for years.  And how I waited to be the last in line for autographs so that I could take out my 20 lps, dozen cds, and five song books for his signature and how he and I chatted for an hour and how I still have one of those albums, along with a photo of the two of us, framed and hanging on my office wall.  Yeah, I understand Drooling Fanaticism.

And Almond manages to be humorous and not take himself too seriously, while still being a bit philosophical.

…I’m willing to argue at this point that we are all Drooling Fanatics, that every single human being carries within him or her the need for music and that we differ only in the matters of degree and expression. If this were another sort of book – a book with intellectual self-respect, for instance – I would support this assertion with a tantalizing anthropological survey of musical devotion within indigenous cultures, and assorted neurological data vector astonishments. Instead, we’ll all have to settle for another bleak memory from my days as a bumbling lothario.

I can’t tell you how many times, as I was reading this book, I was smiling and nodding my head in gleeful acknowledgement of Almond’s hitting the point so perfectly.  (I can’t tell you because I didn’t keep track, not because it didn’t happen.)

His chapter, “On the Varieties of Fanatical Experience,” from which the quote above comes, is one of the best, truest, and most humorous essays I’ve ever read.  I read the chapter out loud to my wife (who is also a Drooling Fanatic in her own right and falls somewhere between Almond and myself [closer to Almond] on the music style spectrum).

It seems both appropriate and heretical that my bookmark while reading this was a concert ticket stub … from a Symphony Orchestra concert.

Looking for a good book? Rock and Roll Will Save Your Life by Steve Almond is a collection of essays in and around the music world and anyone who’s ever had a song running through their head that they can’t get rid of should read this book.

I bought this book with cold, hard cash.

Rock and Roll Will Save Your Life: A Book by and for the Fanatics Among Us