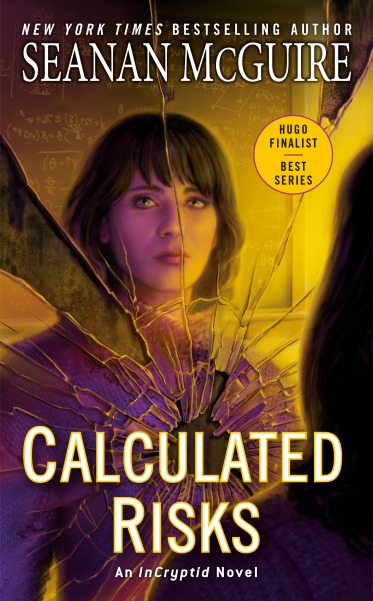 We’re back with the Price family in this 10th book in Seanan McGuire’s InCryptid series.

A family of cryptozoologists (the Price family, who study mythical and not so mythical creatures) are trying to help the Cryptid communities in the United States, while avoiding The Covenant – a group bent on eradicating the Cryptid population.
Sarah Zellaby is a Cuckoo, a form of cryptid that is normally a little evil and tends to hijack the minds of others around them.  However, she was adopted and raised by a good Cuckoo (cousins to the Price’s) and she tends to follow her own code of conduct to avoid evil. But there is a battle raging, between her adoptive family and the Cuckoo population, to turn Sarah completely to one side or the other.
At the moment, Sarah is in limbo.  Literally. She is stranded in another dimension with a handful of friends who are unaware that there is a group of Cuckoos who want her dead. Sarah has much to figure out – who she is; who she wants to be; and how yo get back to her own dimension.
This is one of the most complicated series I’ve read. All of the Seanan McGuire’s books I’ve read are well told with intricate plots and characters, but this series is particularly complex and, despite the fact that are large chunk of the book is a recap to get the reader up to speed, I don’t think this is a book you want to read without being rather familiar with the rest of the series.
The series is really taking a hard turn in a new direction and frankly, I’m not sure I like where it’s going (because I don’t know where it’s going, and I can’t picture it?). No one knows who Sarah is in this new dimension (except the mice) and maybe it’s this need to either explain herself to others or explain to the readers why she’s reacting in this new way, is dragging me down a little.
I appreciate McGuire for taking some risks and really challenging her reader base by going off the tracks in this way (although I just looked at some comments on Goodreads and it seems I’m not alone in feeling a little less than satisfied with this entry in the series), but what’s missing (for me, at least), is intent.  I’m really not sensing a reason for this change – a change in characters and a change in location.
I like McGuire’s books a lot and I’ll check out the next volume, but if it continues to veer off the center line I will probably pull the plug on this series.
Looking for a good book? Calculated Risks by Seanan McGuire is the 10th book in the InCryptid series and takes a bit of a new direction by heading in to a new dimensions. This is not a book you want to read without already being familiar with the series.