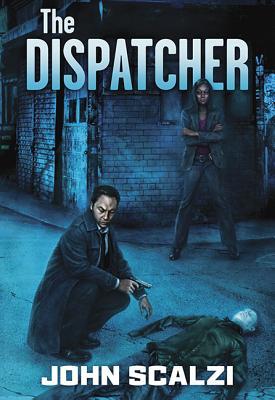 In the not too distant future, it will become nearly impossible to kill someone. 99.9% of the time, when someone is intentionally killed, they come back – their bodies disappear from where they were “killed” and reappear at their home, naked, in bed.  Only death by natural causes or true accidents are otherwise permanent. No one knows how or why this has happened, but it has definitely changed everyday life in many ways – including the creation of a job as “Dispatcher” … someone who ‘kills’ people for pay so that they can be reset for whatever personal reason they might have. (Let’s say someone is in surgery and something goes wrong … ‘dispatch’ them so that the don’t actually die, allowing doctors to try again.)

But while some old problems have gone away, some new problems arise. What happens when a ‘dispatch’ goes wrong and the target actually dies? Who is responsible?  And if you wanted to really torture someone now you could torture them to death, have some goons waiting for the body to reappear, take the person and keep up the torture.

Enter Tony Valdez, a licensed and bonded Dispatcher. When a fellow Dispatcher is kidnapped, local police call upon Tony to help them understand the Dispatcher job and to navigate some of the Dispatcher shortcuts to getting a job done.

What a  great, almost obvious, idea.  I mean, so many people today play video games in which a character ‘dies’ and their life is reset to a home base (or at least reset to somewhere presumably safe) – why not take this into the ‘real’ world?

The book, and particularly the character of Valdez, have all the hallmarks of a Scalzi story – some irreverent humor and some scathing satire. And if you read Scalzi, chances are this is just what you are looking for.

Unlike many of his other books, this one is almost 90% detective mystery, with a sci-fi setting. He does this well, though for such a short book (a novella or even novelette, actually) we spend perhaps too much time setting up the world and the main character before we get to the mystery.

I understand that this was written with the intention of being an audio piece – read by Zachary Quinto. While I may have missed any specific inflections that Quinto may have added, because I read this rather than listened to it, I think it stands just fine as s short sci-fi mystery.  It’s also quite a clever world and I’m eager to read the next volume and wish that Scalzi would return to this series.

Looking for a good book? John Scalzi’s The Dispatcher, originally written for audio and now published in a special edition by Subterranean Press, is a clever sci-fi mystery with all the loveable wit and gruffness that Scalzi brings to his books.