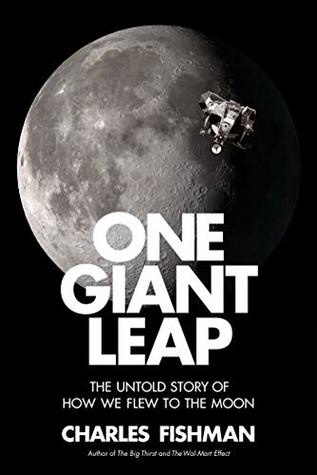 We recently celebrated the 50th anniversary of the first Apollo moon landing. For those who missed it, there was plenty of buzz surrounding the event, with a release of high-definition video footage as feature-length documentary film, and plenty of books about the historic event. I followed much of it, read many of the books, and so I didn’t think I was going to learn many new things about the Apollo program with this book, but I wanted to read it because the event was memorable for me.

I was wrong. I learned a lot.

I didn’t know that there had been another spacecraft (not of U.S. origin) orbiting the moon when Armstrong, Aldrin, and Collins were in orbit and the lunar module was about to make a descent.

I didn’t know who manufactured the spacesuits used for the first lunar expedition (and how they were chosen).

I didn’t know that a 25 year-old student with a notebook of handwritten notes had the power to abort the mission in the very last seconds and was asked if they needed to abort.

These are just a couple of items that come in the early pages of the book. Author Charles Fishman touches on many subjects, but gets pretty in-depth on a few, such as President Kennedy’s thoughts and support for the Apollo program, and some of the mechanics of how the venture was put together.

Because computers and computer technology are so prevalent today (how many teens don’t have a cell phone?) there are generations of people out there who don’t remember or don’t know that computers in 1968 were the size of warehouses. The process of designing a spaceship and lunar landing module, with all the necessary parts, for a mission that really our best scientists only had theories as to what was needed, is just incredible. The story of the computer – trimming down a warehouse sized device to a cubic foot, with the power to plot and re-calculate course adjustments and fuel burn (today’s counter-top microwave has more computing power than the Apollo space flight onboard computer) was quite fascinating.

I’m of the right age to really appreciate this book. A child of the 60’s, I can still remember where I was and my reactions to watching the grainy, black and white footage of Neil Armstrong landing on the moon and the interminable wait for him to go out and walk around. Learning more about all that had to happen to make this momentous event, is a treat.

For my children, who grew up in an age when man had already been to the moon, where we’ve retired space shuttles, and we have SpaceX and re-useable booster rockets, and are planning a mission to Mars – this seems like antique mechanics and about as much fun as reading ancient history in school.

But this is a book I would recommend and a book I will reference when talking about NASA and space and our future exploring the solar system and beyond.

Looking for a good book? Charles Fishman’s One Giant Leap is an excellent resource and history of how we got to the moon.

One Giant Leap: The Impossible Mission That Flew Us to the Moon