TO SLEEP IN A SEA OF STARS – Christopher Paolini 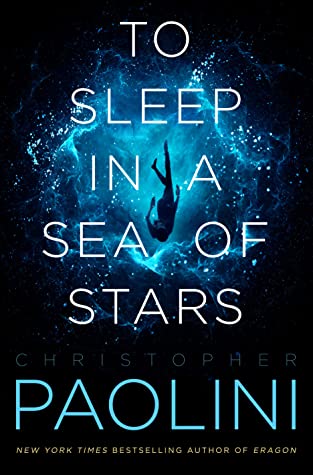 I suspect that there has been a great deal of anticipation for this book – the newest book by the much-acclaimed author of the Eragon series, Christopher Paolini.

Kira Navárez is on a routine survey mission when she discovers an alien artifact.  This might be an exciting discovery if it didn’t bring with it an invasion – not the first contact humanity was hoping for, but not unexpected, either. Now Kira is an expert on this aggressive race (often referred to as “Jellies” do to their resemblance to jellyfish) and will be meeting them on the front line of space battle.

That’s a pretty brief description for a book that’s nearly 900 pages long but I think it’s pretty appropriate and ultimately that’s the problem with the book.
This is a first contact novel, with the alien race being aggressive.  This is certainly not a new theme in science fiction, so we would be looking for some aspect that is original and exciting.  And I can’t find it.
There is a lot of exposition and repetition here which slows the read down.  While it contrasts nicely with the action scenes, the contrast is almost too severe – feast or famine – and the sluggish portions overwhelm the few active scenes.
Any time you go into an ‘epic’ novel (and a book well over 800 pages is definitely on the epic scale) you should expect to find characters that carry the story.  Paolini’s Eragon is a good example. But here we essentially have two characters – Kira and the Jellies.  Everyone else is so bland and uninteresting as to be just names on the page because someone other than Kira needed to do something or provide some information.
I thought Kira was interesting and a good protagonist. Unfortunately she doesn’t really grow through the course of the novel. There is a change, but I felt it was rather abrupt. And the Jellies, being such a major part of the story, remain an awfully big mystery.
Though I was never a big fan or follower of Paolini, I enjoyed The Inheritance Cycle and was very interested in reading this, especially since it was more sci-fi than fantasy.
This was certainly a much-anticipated book and interestingly, I recently read another highly anticipated sci-fi book by a best-selling author, and it, too, had a first contact with an alien race and also had two main characters – the protagonist and the alien. But that book pulled the reader in with interesting characters and a plot that constantly had the reader on edge. This book gets caught up in telling a story, forgetting that the story is more interesting if the characters brings some kind of stakes to what is happening.
Looking for a good book? To Sleep in a Sea of Stars by Christopher Paolini is a long, slow first contact sci-fi novel. It is not recommended except to those who will gladly read anything Paolini writes.