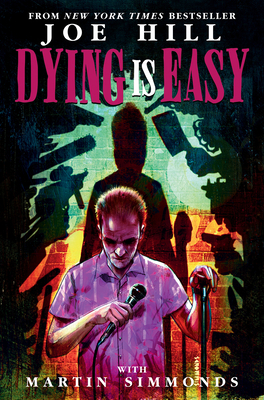 Carl Dixon. An up and coming comic ready to do whatever it takes to become a comic superstar, and known among the other comics for stealing jokes.

So it isn’t a surprise when another comic asks Syd, off-handedly, how much it would cost to have Carl Dixon killed.

After the set, Syd is out back having a cigarette with Dixon and takes offense at the fact the Dixon stole some of Syd’s jokes. “I wrote three months for fifteen minutes of good material. I wrote it for me, not you …,” says Syd and then proceeds to beat the crap out of him and leaves Dixon puking in the street.

But the next morning, Dixon is found dead where Syd beat him, and now Syd is the prime suspect. Syd will need to call up his former police skills to find the real killer to clear his name.  Possible suspects?  Only every comedian in the country.

I had just finished author Joe Hill’s graphic novel Basketful of Heads when I saw this and since I really liked Basketful, I was looking forward to this.

Unfortunately, this one doesn’t have the same magic.

This story is darker – which is a little strange to say since Basketful has multiple murders and a good bit of supernatural. It is darker because of the tone. Syd’s attitude is dark and foul, and Martin Simmonds’ art accentuates this mood.

I don’t mind a dark story, but there needs to be something about the story that keeps the reader’s interest, and unless you really enjoy cranky old guys with bitter jokes that don’t feel much like jokes, then there’s not much else here to dig in to.  There is the mystery, but that’s not really Joe hill’s strong suit – telling mysteries. Hill’s best at creating characters who navigate dark worlds.  He’s done that again here, but he’s taken the easy road by making our main character a comic to explain his dry humor.

Simmons’ art is equally moody and dark.  It’s not my favorite style – sort of a sketch quality rather than finished lines and clear pictures, but it works about as well with the story as any style would.

There are moments that remind me why I like Joe Hill’s work:

“I thought you said I could get a ‘Rican to kill him for forty. How the price go up just to punch him in his joke-stealing mouth?”

But at the close of the book the feeling is still just, “Eh.”

Looking for a good book? Dying is Easy by Joe Hill and Martin Simmonds is a dark graphic novel that doesn’t have much going for it other than the fact that Joe Hill’s name is attached to it.