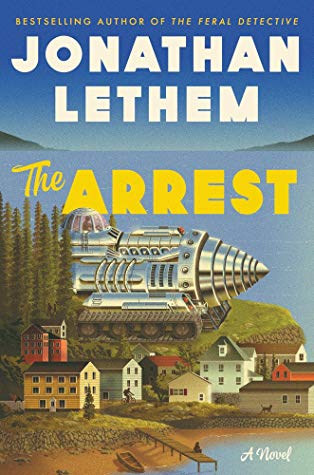 Sandy Duplessis was living a good life. He was living in Los Angeles and working as a screenwriter. His writing partner is his old college friend Peter Todbaum, and the charismatic Todbaum has become a king on the Hollywood scene – everyone listens to him and wants a piece of his action. When Sandy’s sister Maddy comes to town, Todbaum finds himself quite attracted to her.

Then came the ‘Arrest’ when everything just stops and only those able to adapt successfully move on. Duplessis, now called Journeyman, finds himself in Maine, farming with his sister when Todbaum shows up in a nuclear-powered tunnel-digging machine. He’s still charismatic and still scheming to stay at the top of a now-dead Hollywood scene.  Is Journeyman the only force on earth who can keep Todbaum under control?

My first couple of chapters into this book and I was almost giddy with excitement at reading something very different. This is science fiction on par with Kurt Vonnegut and Margaret Atwood … authors we don’t normally classify as sci-fi writers, though we probably should.

But my giddiness turned to boredom somewhere about a quarter or a third of the way in.

There’s a lot of observation and a lot of reflection on the part of Journeyman, and very little action taken on that observation.

The story is post-apocalyptic and dystopian … and at the same time, it isn’t.  The Arrest, and the causes of the Arrest, are never really discussed. What’s important is only that it happened.  It’s more about setting a bleak landscape for Journeyman to observe from than it is about a world devastated and what is happening in it.

I knew nothing about author Jonathan Lethem prior to this, but when I read the description of the book, I was highly interested in reading this, but the deeper I got into the book, the less interest I had.

Looking for a good book? The Arrest by Jonathan Lethem is slow, passive sci-fi, which may appeal to some, but became less interesting the further I read.