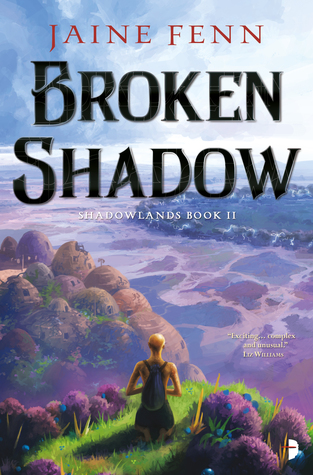 I wasn’t a big fan of the first book in this series, but I already had the second book loaded on my Kindle and decided I would move forward with it, keeping an open mind as best as possible.  Fortunately, for me, I did enjoy this book more than the previous volume.

Rhia Harlyn has her eye in the skies as she studies and reports on her observations about the nature of their world and the sun.  But this gets her in a bit of trouble. She is accused of heresy for her ideas and her life’s work will be destroyed. She may be put to death as well.

Rhia’s brother, Etyan, is still kind of a big goof, not living up to his responsibilities (he is heir to the Harlyn estate) as his transformation (see last book) has him half Skykin. But since his girlfriend, Dej, is all Skykin, this isn’t a problem for him. The two of them have a quiet place in the forest where they can travel to and from the Skylands as they please. (The Skylands are giants shades in the sky to protect the earth, and where the Skykin dwell.)

Rhia’s research brings her in more direct contact with the Skykin, who have some knowledge and answers to some of Rhia’s questions – proving her research correct (not that it will help her with the backward thinking of her society). But some of the answers are to questions she hadn’t even considered asking, which could lead to disaster.

I definitely felt much more connected to this story and to the characters in this book, and could follow the events much better. I actually became interested in the science of what was happening, and the obvious correlations to our own distrust of science throughout history (and calling scientists heretics for reporting something counter to common belief).

Despite my renewed interest, I still felt that the book moved too slowly.  I recognize that this comes from reading a lot of (too many?) best-seller-style books, or action-style narratives, but non-the-less, I was still bored off and on here.  Where did 400+ pages go in this plot?

At the moment I am up in the air (pun intended) as to whether or not I would request the next volume in the series (assuming there will be one).

Looking for a good book? Broken Shadow by Jaine Fenn improves on the story begun in Hidden Sun and becomes much more interesting, but still takes a bit too long to get through.