ALIVE IN SHAPE AND COLOR – anthology 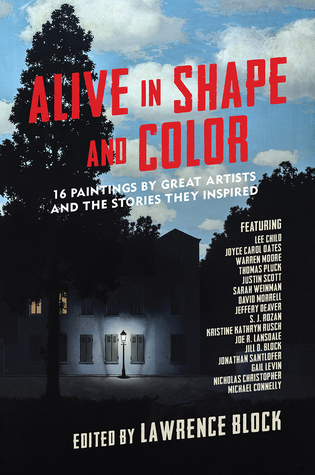 Stories inspired by paintings?  That makes a lot of sense.  Stories, many by noted and respected authors, of classic, respected works of art?  This should be really fantastic.

Should be, but isn’t.

In his foreword, editor Lawrence Block notes that this was to be a follow-up to his previous collection (In Sunlight or in Shadow) but that he didn’t get the exciting responses he had hoped, and even after getting commitments, two writers were not able to deliver – including Block himself.  The general impression is that this was not a priority for many involved.

Overall the stories are a bit dull and uninspired.  This is odd, given the quality of the art that inspires them and that each author was able to select the artwork they wished. While I recognize that the artwork served as ‘inspiration’ (which can be very liberally applied) I generally couldn’t make the connection between artwork and story, or I found the connection extremely tenuous.

Some of the authors here are authors whose work I regularly read, which is part of what drew me to the collection.

Two stories stood out for me – one for being quite enjoyable and the other not so much.

Sarah Weinman’s “The Big Town” (inspired by Nude in the Studio by Lilias Torrance Newton) is the final story in the book and is far and away the best piece included.  Aside from the fact that this story is also most obviously connected with the painting among all the stories, the work is moody and reflects the era of the artwork. It’s excellently written and the narrative builds well. My interest in the story was captured early and held on all the way through.  I’ve never read anything by Weinman prior to this, but I’ll be looking for more of her work now.

My least favorite piece was “Truth Comes Out of Her Well to Shame Mankind” by Thomas Pluck (inspired by La Vérité sortant du puits by Jean Léon Gerome). The title was perhaps my favorite, and the title, when taken in context of the painting, was really intriguing.  But my one word comment at the end of the story was … “Yuck.”

David Morrell’s story here is interesting and well done … and nearly memorable (as I looked back through the book to write this review, I remarked “oh yeah, that was okay”).

The rest really were quite average.  Not inspiring and not particularly memorable, which makes the book a bit of a disappointment.

Foreword: Before we Begin… by Lawrence Block
“Safety Rules by Jill D. Block
“Pierre, Lucien, and Me” by Lee Child
“Girl With a Fan” by Nicholas Christopher
“The Third Panel” by Michael Connelly
“A Significant Find” by Jeffrey Deaver
“Charlie the Barber” by Joe R. Lansdale
“After Georgia O’Keeffe’s Flower” by Gail Levin
“Ampurdan” by Warren Moore
“Orange is for Anguish, Blue for Insanity” by David Morrell
“Les Beaux Jours” by Joyce Carol Oates
“Truth Comes Our of Her Well to Shame Mankind” by Thomas Pluck
“The Great Wave” by SJ Rozan
“Thinkers” by Kristine Kathryn Rusch
“Gaslight” by Jonathan Santlofer
“Blood in the Sun” by Justin Scott
“The Big Town” by Sara Weinman
Permissions

Looking for a good book? Alive in Shape and Color, edited by Lawrence Block, is a collection of stories inspired by works of art, written by noted authors, and should be much more appealing than it is. Overall this was a disappointing and not particularly memorable collection of short stories.

Alive in Shape and Color: 17 Paintings by Great Artists and the Stories They Inspired