FROM THE GRAVE – David Housewright 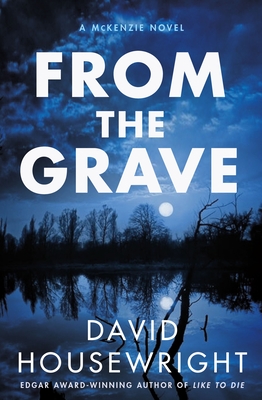 Rushmore ‘Mac’ McKenzie is a private investigator, a former police officer, in St. Paul, Minnesota.  He left the force in order to accept the reward money from a case he had solved.  Police officers can’t accept reward money. Now a case from his police days has come back to haunt him.  Literally.

One of Mac’s closest friends, Shelby Dunston, hurries to inform him about an incident she just encountered at a public event in which a local psychic medium was giving readings. One man in the audience got upset and made a scene when he was told that his father, speaking through the medium, told him he would reveal the location of the money if he killed McKenzie. Shelby is certain it’s Mac the medium/spirit was talking about.

It doesn’t take long to realize that the man at the public reading was Ryan Hayes. Ryan was only recently released from prison where he was serving a twenty-five year sentence for his part in an armored car robbery – even though most people agreed he was forced into it by his father, Leland Hayes.  Leland Hayes was shot in the head by second year officer Rush McKenzie. The money, hidden shortly before the shootout, was never found. Now it seems that Leland is trying to enact his revenge from the grave, by putting up a reward (the secret to where he hid his money) in exchange for killing Mac.

A Mac McKenzie novel is not the sort of book where one expects to find a little supernatural element.  But don’t worry … Mac’s not a believer.  Well, not at first, anyway.

We’ve often seen McKenzie investigating in order to help others, so this is a fun treat to see him out there to protect himself and to answer some nagging questions (how does a medium know so much about him?).

We get to experience the world of psychics and mediums (there’s a convention that McKenzie gets to attend), as well as the world of ‘reality television’ – wouldn’t you know … the psychic who delivers the message about ‘killing McKenzie’ also happens to be in the running for a new reality tv show (it helps that she’s an attractive woman).

McKenzie (and the reader) gets sidetracked here and there with some red herrings.  Honestly, I’d feel cheated if that weren’t the case with a McKenzie novel.  But for the most part, this is pretty straight-forward and it’s not as intense a thriller as some of his recent McKenzie novels have been.  Still McKenzie is a great character and this is recommended read for mystery fans.

Looking for a good book? From the Grave by David Housewright is the 17th book in the Mac McKenzie Mystery series, though it can be read as a stand-alone novel. Mystery fans will enjoy this brush with the paranormal.