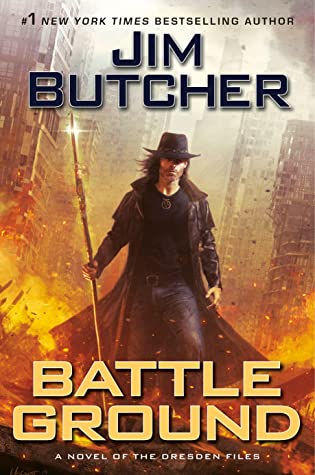 Battle Ground … the title says it all.  Almost this entire book takes place on the battle field in a massive confrontation between the local supernatural world and a Titan.  Yeah, I said it … a Titan.

This battle – this war – is set up in the previous book when some of the peace talks went south. Wizard Harry Dresden has been in more than his share of battles against overwhelming odds, but this is going to test his limits .  Many will make the ultimate sacrifice and still might not be enough.  And if ever there was a need for adage “the enemy of my enemy is my friend” to be put into play, this would be it.  Here Harry will be assisted by all manner of Chicago denizens – anyone who has a stake in protecting their home, even if it means fighting along side the likes of Harry Dresden (who has pissed off any number of families or individuals).

This is the plot.  It’s just 400 pages of battle prep and battle with about 30 pages of denouement.

As with any war, people are going to die and readers should be aware that some favorite characters might not make it through this battle ground. And NO one comes out unscathed.

It’s hard to imagine that a 400 battle scene could manage to hold on to the reader’s attention, but author Jim Butcher is no slouch. He gives us just enough of a breather between pitched battles to allow us to catch our figurative and literal breaths before moving on to the next fight, which somehow is bigger and badder and with so much more at stake.  Seriously … I think I may have been almost hyperventilating at the end of some chapters.

Aside from great action scenes, this book gives a number of other Dresden Files characters a chance to rise to the occasion and have a moment of glory.

The ending took me by surprise. Yet it certainly feels ‘right’ in the context of everything else. Suffice it to say that future Dresden Files books will take on a different tone moving forward.

I really appreciate when the stakes are high and the obstacles to achieving the goal are challenging, and it just doesn’t get much better than this.

Looking for a good book? Battle Ground by Jim Butcher is the 17th book in the Dresden Files series.  It’s a little low on plot – because the plot has been established in earlier books – but it makes up for it with lots of intense action.