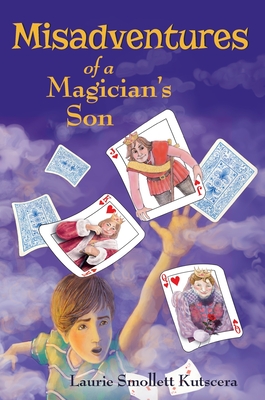 There aren’t many twelve-year-old’s who know magic, but Alexander Finn was trained by the best … his father. But right now, Alex can’t see how magic could possibly help him.  His father has died and his mom has moved them to her hometown of Orchard, Maine. Things couldn’t look bleaker and Alex doesn’t even want to unpack.  To do so would be to admit and accept these changes – something he doesn’t want to do.

One afternoon, while poking through his father’s desk, he discovers a deck of cards hidden at the back of a drawer.  Alex quickly discovers that this is no ordinary deck – even for a magician. In this deck, the face cards come alive. King Anton, Queen Olivia, and the Jack of the Hearts become Alex’s closest friends and they, in turn, want to help Alex and his mother as they settle in to their new life.

Alex learns of a magic competition in their town (how convenient!), which he probably had a good shot at winning based on the skills he learned from his dad, but with the help of his special deck of cards, he’s practically guaranteed the top spot. But there were others who thought that they had a good shot at winning and maybe didn’t appreciate newcomer Alex’s tricks, for after the competition, Alex discovers that his deck of cards has gone missing! Alex desperately wants these cards back … not only does he consider them friends, and they are highly unique, it remains one of the last connections to his dad and he’s not ready to give that up so easily.

This book is a sweet, gentle, coming-of-age story with just the hint of fantasy that should appeal to middle school readers. The idea is clever – what middle school boy (or girl) doesn’t like magic and hasn’t checked out books and tried to learn it on his/her own?  Okay, maybe I’m just putting myself out there… I certainly did this at about Alex’s age (right before wanting to become a master puppeteer).

As sweet as this is, I never completely bought in to the story. Some of the action/responses felt a little bit forced on me (a need to move the story forward or to identify a character in the quickest way possible) and I felt more a voyeur to the action than being brought right in to the story.  Still, I can see some readers enjoying this.

The author, Laurie Smollett Kutscera, also provides her own artwork here to help illustrate the story.  It is equally sweet and gentle and appropriate for the targeted reader.

Looking for a good book? Misadventures of a Magician’s Son by Laurie Smollett Kutscera is a gentle coming-of-age story for middle school readers. Some readers will likely connect easily and really enjoy Alexander Finn’s adventure while others, like me, will find it cute, but not particularly memorable.

Misadventures of a Magician’s Son