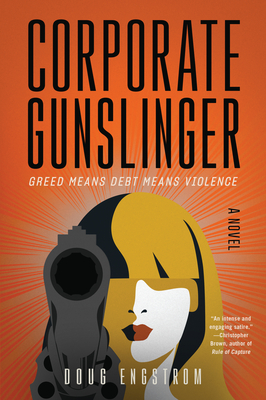 Kira Clark is an aspiring actress. She has financed her education through loans. And with acting being what it is, she borrowed just to pay rent or to pay the premium on her school loans.  with debt compounding, Kira faces a grim reality.  Her loans were secured with a ‘lifetime services contract’ – meaning if she defaults, the bank will control every aspect of her life. With her debt now out of control and no means to pay it back, Kira resorts to the only option left open to her … she becomes a corporate gunfighter.

In this world – not so much a future world, but an alternate reality (and sadly not so far-fetched) from our own – there is no Judge Judy or small claims court, filled with lawyers trying to make deals so that they can claim a share of the payout.  no, the final legal recourse is a duel, old west style.

After a solid year of training, Kira goes to work for TKC Insurance. Anyone challenging a claim against TKC Insurance – if they decide not to payout for instance – the legal recourse is to fight a one-against-one gunfight duel against the insurance company’s representative.

How it works is that the two fighters go into a single changing area to prepare for the fight.  If either does not come out of the changing room and onto the dueling field by a specified time, the duel is forfeited and the standing fighter on the field is declared winner. If both face off, the last fighter standing is declared winner. The duel is generally skewed toward the insurance companies, of course, since they have trained and prepared their agents.

Kira quickly rises up the ranks of successful duelists, though admittedly in large part by psyching out her opponents who will often not even show up to the field. But even in an actual duel, the safest way to ensure a win is to score a kill shot, guaranteeing that the opponent goes down. But killing people, even though it’s legal, it’s her job, and those people always have an out, takes its toll on Kira. Unfortunately, her debt is deep and she’ll be doing this a long time, or until someone kills her.

How do I describe to you how utterly fantastic this is? The commentary on our culture is so spot on.  We are a nation obsessed with greed and with violence (just note the rise in interest in MMA-style fighting).  How far-fetched is it, really, that those in control of both (greed and violence) combine them? We’ve done it before (the gladiator games of ancient Rome) so it seems likely that it’s only a matter of time before we do something similar again.

Regular readers of my reviews will know that I often talk about how much I prefer character-driven stories, and while I’ve extolled on this concept, the character of Kira is just great.  She sees her role as a gunslinger as just an act – a part to play, just like any other she might, using her theatre training. But some of her kills get under the facade and she questions what she does.

Kira’s professional ‘Second,’ Diana Reynolds – who personally trained Kira and saw something unique in her – is a wonderful balance for Kira, both in the story as a character, as well as for the reader to not constantly have Kira’s personality at the forefront.

While I am a male and my viewpoint is clearly skewed, I thought that these three leading female characters (Kira’s closest friend is Chloe) were written with warmth, strength, and integrity. It takes some courage for a male author to decide that his three central figures will be female and Engstrom handles with grace.

Finally, it certainly helped my enjoyment of the book that this is set primarily in the U.S. Midwest and I could recognize the basic landscape.

Looking for a good book? Corporate Gunslinger by Doug Engstrom is a powerful, well-written tale. The copywriter for the book cover lays it out perfectly: “Greed means debt means violence.”