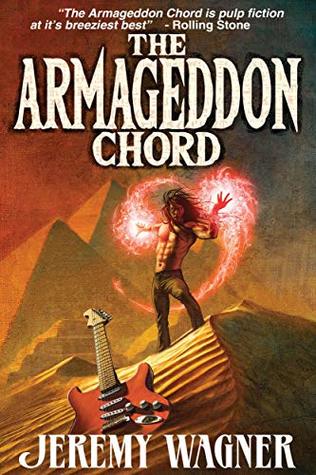 Meet Kirk Vaisto, a heavy metal rock guitarist. He is often called “The God of Guitar” by his fans and the journalists who write about music.

Meet Egyptologist, Helmut Hartkopff. Helmut has been searching for a specific artifact, The Song of Sethis, which, when used properly, will release Sethis (sometimes better known as “Satan”) from his imprisonment in the bowels of the earth.

Meet multibillionaire, Festus Baustone the Third, who has bank-rolled Helmut’s search and who won’t let anything stop him from having the Song of Sethis played for the world, including…

Festus Baustone needs a musician to first transcribe the Song of Sethis. It is music but written in a form of Hieroglyphics. And because the author of the Song of Sethis, Aknaseth, was known to be a good musician who played a six-stringed instrument, much like the modern guitar, Festus and Helmut believe they need a guitar player. Since Festus wants only the best, he asks who is the best guitar player in the world. The answer is Kirk Vaisto – the “God of Guitar.”

Festus pays a ridiculous amount of money to have Kirk transcribe the music and to play the song, and he sends his daughter, Mona, to follow and see how Kirk is doing.  She gets there just as Kirk’s computer program has finished the transcription and he is about to try playing it.

The song has surprising effects, sending Kirk into a trance-like state, with his fingers moving faster and faster, and images of chaos and destruction. As the song finishes and he comes out of his trance, he sees that his entire studio is completely trashed from the violence of the song. Mona, who witnessed the same things, assures him that the Baustone company will rebuild his studio for him. And while Kirk wants nothing more to do with the song, Mona is quite certain that her father won’t let Kirk just walk away.

Kirk plays the song one more time, in a specially built studio, for Helmut and Festus hear what they have worked for so long to acquire. There are the same results, which has a negative effect on Kirk, but Helmut and Festus seem almost giddy afterwards. They know now that this is indeed the song that will release Satan from the underworld. But to do that it needs to be heard by the entire world. Baustone and Helmut plan for a live broadcast of the song, to be played by Kirk (his fame should get a large number of viewers).

Kirk does everything he can to avoid playing, but Mona was correct that Festus would stop at nothing to release Satan into the world. Fortunately, Kirk will get a little assistance along the way.

I was a little bit nervous about reading this … I felt as though there was a good deal of hype surrounding this book, and I don’t usually trust hype. But I’m always looking out for fiction that incorporates music. And that this was a dark fantasy or horror book just added to my interest.  Fortunately, the hype is well deserved … this is a really good book.

Author Jeremy Wagner really does a fantastic job balancing all the different aspects of this story.  There could very easily have been too much of the German Egyptologist; too much of Kirk and his skills at guitar; too much of the set-up about releasing Sethis; etc. But the story moves along at a quick, but appropriate pace, with characters that are unique and clearly motivated.  There’s romance (you can probably guess with whom) and terror, good versus evil, and just enough religion/supernatural aspects to keep you on your toes.

I wondered, early, how Wagner would handle the religious aspects of Satan (can you have a Satan without God?), but the idea is addressed, and in a surprising and very satisfactory way.

I’m not into heavy metal music (the hardest rock I would listen to might be Ballroom Blitz by Sweet), but I did understand why a story about the devil and a musician might feature a heavy metal rocker.

Looking for a good book?  The Armageddon Chord by Jeremy Wagner is a quick read, and a real page-turner … I really wanted to read ‘just one more’ chapter each time I opened this book.  You will, too.