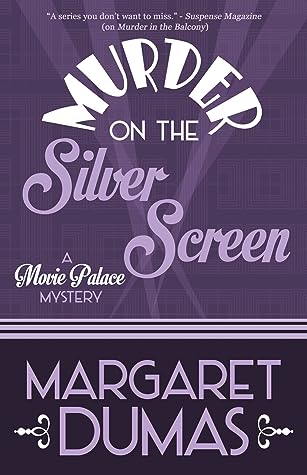 Nora Paige is the manager of The Palace movie theater in San Francisco.  She left her beloved Hollywood when her lying, cheating, no-good, movie star husband had an affair with a co-star. As a huge fan of classic movies, Nora is a perfect fit for The Palace, playing some of her favorite classic films on the big screen.

The Palace also happens to have its own ghost, Trixie – the spirit of a young usherette who died in the theater in a tragic accident in the 1930’s. No one can see Trixie except for Nora.

A movie theater showing classic films doesn’t make a lot of money and as we start this book, Nora and her staff are preparing the space for one of the four theater owners, Tommy, who plans to use the theater to make a world-wide announcement about a new tech game, created by the famous game creator, S Banks, That should become one of the biggest successes ever (mostly because of the huge cash prizes for the first to solve some of the game’s clues.

As Tommy and S Banks appear on the giant screen at The Palace to make their announcement, S Banks collapses shortly after taking a sip of his energy drink, and is later pronounced dead by poisoning.  Tommy is accused of Banks’ murder and Nora (with help from the spirit pixie Trixie) must find out who really killed Banks to get one of her business’s owners off the hook and restore some faith and credibility to her theater.

I’m typically not a fan of the cozy mystery genre, but there are a few cozy mystery authors (many of them published by Henery Press) that I’ve come to really like, and Margaret Dumas, with this Movie Palace Mystery series, is one of the newest and one of the best.

It helps that I also enjoy many classic movies. And Dumas has some fun with the reader, inserting synopses of films, complete with trivia tidbits (“She’s played by Priscilla Lane, and I forgive you if you don’t know her. She retired from films only four years later, at the ripe old age of thirty-three.”) and personal commentary (“Let me start with some history. Before there was the Internet, there was the Reference department—a room full of books and smart women. When anyone wanted to know anything, they called the girls in Reference to find out.”) when she has her character of Nora writing a column (“Movies My Friends Should Watch”) under the pseudonym of Sally Lee.  (By the way, there really is a moviesmyfriendsshouldwatch website.)

This is all fun and informative (I’m either nodding in agreement with Dumas/Paige/Lee’s assessment of the films, or making notes of films I want to watch) but what really makes this series light up is the cast of splendid characters.  I’ve seen a number of female protagonists who dither about and seem to accidentally solve the crimes, or make bone-headed moves and need to be bailed out by the dashing, single detective. Nora, though, strikes me as a very real, modern woman. Strong in many ways (on her own, running a business) but knowing her own weaknesses.

Trixie is just plain fun. From the era that Nora admires so much for the films, Trixie is caught in the past but working in the present.  The books could easily be taken over by her character, but Dumas expertly uses Trixie in just the right amount.  She does step it up a bit in this book as Nora’s friends hold a seance in order to speak to the spirit that they think might be haunting the theater. Trixie is excited by this, hoping she might be able to finally talk to more than just Nora.

All of the characters are unique and delightful and they interact well with one another.

The mystery itself is well conceived and well plotted.

My one issue here is that the whole theme of the online game, created by S Banks, is an awful lot like the convention used in Ready Player One.  A massively complex digital game. Here players download the game app to their phones and follow clues to find the big prizes, rather than actually going inside the game, but I constantly noted the similarities anytime the game was brought up.

Still, this was a lot of fun and I will eagerly read any new Margaret Dumas mystery as they are available.

Looking for a good book? Classic films, a ghost from the 1930’s, a movie star ex-husband, and a world-wide digital game collide at The Palace Theater in Margaret Dumas’s Murder on the Silver Screen … a delight, must-read cozy mystery.

Murder on the Silver Screen