THE COMPLETE AND ORIGINAL NORWEGIAN FOLKTALES OF ASBJORNSEN AND MOE 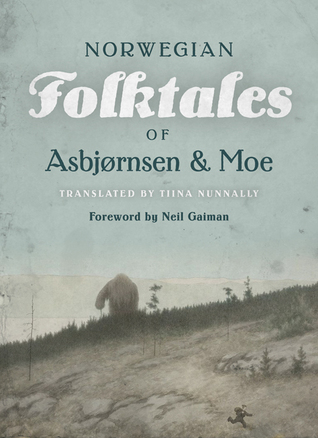 This book holds so much appeal to me on so many different levels.  First of all, I’m fascinated by fairy tales, folk tales, and mythology. The creating of myths and legends to explain the unexplained, or to teach lessons, or simply to pass along stories to new generations is so remarkable.  We get caught up in best-seller fiction that we tend to forget these roots of story-telling.

Then there’s the absurd and the supernatural elements.  For most readers today, if I offered a novel or a collection of short stories of trolls, or people turning into pigs or horses or birds, or where witches offered up promises of riches, the responses would typically be that the readers isn’t interested in supernatural fiction or such fantasy elements.  But if it’s offered as a fairy tale or folk tale, the response tends to be different.

And then there’s the unique ‘Norwegian-ness’ to the stories.  I loved reading these and thinking that it is very likely that my ancestors were read or told many of these stories as they were growing up.

And finally, I liked how new some of these were to me, and how similar to other countries’ tales other stories were.

I have to admit, the character of Ash Lad was entirely new to me, and he appears in a number of stories in this collection. He was apparently a  popular ‘everyboy’ symbol. He is often (always?) the youngest of siblings, given the worst chores and not much is expected of him in terms of success. But of course, he is usually the one who succeeds where all the others before him have failed. The first two times I read a story in which Ash Lad appeared I didn’t think much about the character, but by the third time, I had grown to look forward to reading the Ash Lad stories.

Some stories were quite interesting for their different look at a familiar concept.  “Kari Stave-Skirt” was quite an interesting variation on the Cinderella story. And “The Twelve Wild Ducks” is the Snow White story.

Most of us have heard of frog’s turning into prince’s or swans becoming a princess, but never before have I read a story in which a cat’s head is cut off and “the loveliest princess that anyone could ever imagine” appears! (“Sir Per”)

One of the great things about folk tales is that if you don’t want to explain how something happened, you don’t have to! “There were once three brothers,” begins the story, “Nothing is Needed by the one All Women Love,” “I don’t really know how it happened, but each of them had been given one wish so they could have whatever they wanted.”

And of the greatest titles for a short story/tale would have to be: “The Blacksmith They Didn’t Dare Let into Hell.”

In addition to a quite thorough collection of fairy tales, we are given numerous forewords introductions (collected from the various Norwegian editions) that give us some valuable insight into the development and changing role of folk tales in Norwegian literature.

It took me a little longer than normal to read this book because I savored it.  The tales are often quite short, but reading too many in one sitting (certainly not how they would have been read or told to children) would have them blend together a bit.

I’ve read most of Andersen’s and Grimm’s fairy tales and it was a real treasure for me to read Asbjørnsen and Moe.

Foreword – Neil Gaiman
Translator’s Note
3 About Ash Lad, Who Stole the Troll’s
Silver Ducks, Coverlet, and Golden Harp
The Gjertrud Bird
The Griffin
The Quandary
Richman Peddler Per
Ash Lad, Who Competed with the Troll
About the Boy Who Went to the North Wind and Demanded the Flour Back
The Virgin Mary As Godmother
The Three Princesses in White Land
Some Women Are Like That
Everyone Thinks Their Own Children Are Best
A Tale of Courtship
The Three Aunts
The Widow’s Son
The Husband’s Daughter and the Wife ’s Daughter
The Rooster and the Hen in the Nut Forest
The Bear and the Fox Why the Bear Has a Stump of a Tail
The Fox Cheats the Bear Out of His Christmas Meal
Gudbrand Slope
Kari Stave-Skirt
The Fox As Shepherd
The Blacksmith They Didn’t Dare Let into Hell
The Rooster and the Hen
The Rooster, the Cuckoo, and the Black Grouse
Lillekort
The Doll in the Grass
Paal Next-Door
Soria Moria Castle
Sir Per
Little Aase Goosegirl
The Boy and the Devil
The Seven Foals
Gidske
The Twelve Wild Ducks
The Master Thief
The Three Sisters Who Were Taken into the Mountain
About the Giant Troll Who Never Carried His Heart with Him
Dappleband
Nothing Is Needed by the One All Women Love
Ash Lad, Who Got the Princess to Say He Was Lying
The Three Billy Goats Gruff, Who Were Supposed to Go to the Mountain Pasture to Fatten Up
East of the Sun and West of the Moon
The Hen Who Had to Go to Dovre Mountain or Else the Whole World Would Perish
The Man Who Had to Keep House
Tom Thumb
Haaken Speckled-Beard
Master Maiden
Well Done and Poorly Rewarded
True and Untrue
Per and Paal and Esben Ash Lad
The Mill That Keeps Grinding at the Bottom of the Sea
The Maiden on the Glass Mountain
Butterball
Big Per and Little Per
Ragged Cap
The Bushy Bride
The Tabby Cat on Dovre Mountain
Farmer Weather-Beard
The Blue Ribbon
The Honest Four-Skilling Coin
The Old Man of the House
Foreword to the Second Norwegian Edition – Peter Christen Asbjørnsen
From the Introduction to the Second Norwegian Edition – Jørgen Moe
Foreword to the Third Norwegian Edition – Peter Christen Asbjørnsen
Foreword to the Fourth Norwegian Edition – Peter Christen Asbjørnsen
Notes on the Regional Collection Sites of the Tales
Index

Looking for a good book? The Complete and Original Norwegian Folktales of Asbjørnsen and Moe is valuable book and resource of fairy tales and anyone interested in the history of literature or story-telling, or just a great collection of classic tales, this is definitely a book to have.

The Complete and Original Norwegian Folktales of Asbjørnsen and Moe