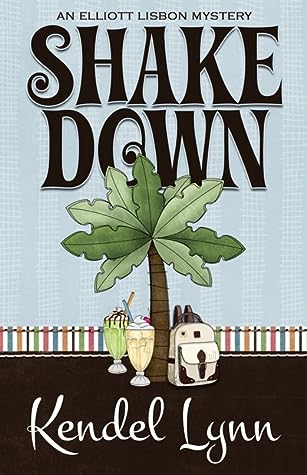 As my book review blog is now seven years old I have become much more selective in the books I request. Shake Down by Kendel Lynn was not something on my watch list, but as I’ve been enjoying a number of different mystery series’ published by Henery Press, I thought I’d give this one a try as well.

Eli Lisbon is working on becoming a private detective.  She also happens to be the director of the Ballantyne Foundation. It is just one week before the annual Beach Ball at the foundation and she’s on the committee to secure the dessert centerpieces.  A piece of cake, right? (Pun intended.)  But the head baker goes missing.  When Eli looks into the situation she learns that the baker is supposed to be the maid of honor at a wedding the following week, and that the maid of honor and bride-to-be had previously been rivals on a reality television show.

No one seems to know if there’s still bad blood between bride and maid. Did something happen to the baker or did she leave the cozy beach resort on her own? And more importantly, who’s going to make the cake centerpieces for the Ball?

This is the fifth book in a series, but it is the first book I’ve read. I don’t think that I was missing anything too important about Eli – I felt like anything I needed to know what presented to me. The story is classic cozy mystery – we don’t get any overt violence, just the hint of something possibly having been done.

I am typically not a fan of cozy mysteries, though there are a few that I’ve really liked.  This particular book never really caught my attention. I felt it moved along much too slowly (a problem I find with most cozy mysteries) and Eli didn’t strike me as very remarkable or exciting.

For the most part, this was just a very average read.  Fans of cozies would probably really like this, but it didn’t quite work for me.

Looking for a good book? Shake Down by Kendel Lynn is cozy mystery, the fifth book in a series, and is generally an average read.