Posted by Daniel on May 11, 2020
Posted in: OTHER. Tagged: 3 Stars, Book Reviews, Books, Literature, Reviews. Leave a comment 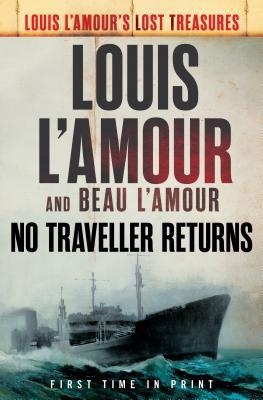 The SS Lichenfield is carrying a cargo of highly explosive naphtha across the Pacific.  Every crewman knows how dangerous such a cargo is, and that one accidental spark could kill them all. Travelling with such cargo has each crew member reflecting on what’s important in their lives. Some have family that they don’t see enough. Some are running away from a past, and others are running toward something still unseen.

This novel is an early, and unfinished work by master storyteller, Louis L’Amour.  It has been completed by his son, Beau, who maintains the Louis L’Amour estate and has been editing and publishing much of Louis’ unfinished works as a “Lost Treasures” series. Not too long ago I read and reviewed Louis L’Amour’s Lost Treasures Volume 2 which I enjoyed. Seeing the rough starts and rewrites, and notes on characters is a really interesting peek inside the methods of a popular writer. This book, being a completed novel, doesn’t have that same appeal and really must be read and reviewed as a completed novel. And in that sense, this just doesn’t work.

We can see that this is an early attempt, and a rather clumsy one at that.

This is sort of a “Love Boat” for the working class.  We get to know many of the ship’s workers. We get a glimpse of the diaries and a glimpse of their off-ship lives, and maybe, if we’re lucky, their path will cross one another off ship, but for the most part, we get separate stories which are weakly tied together in an attempt to make it a cohesive story. But the characters are too many to follow each of them satisfactorily. Just as we get in to one man’s story, we turn and get in to another man’s story.  And then another’s, and possibly more, before we get back to the first story. I felt I was constantly being pulled away from the story rather than being brought into more story and the effect for me was that it was taking too long without getting results.

As a character study, this is quite fascinating.  We get a good glimpse at some character traits that L’Amour used over and over again – the tough guy who would walk through steam to save a soul – but I found myself more interested in a character type that I don’t remember seeing often in L’Amour’s books (and I haven’t read them all, so perhaps this character is present in the L’Amour canon) – the dedicated and respected worker who, because of an ‘obvious flaw’ (in this case, a stutter) doesn’t fit in with the rest of the macho men, but still manages to be necessary and come through in a pinch. I’d definitely like to see more of this type of character in L’Amour.

Looking for a good book? No Traveller Returns by Louis’ L’Amour is an interesting read from the perspective of this being an early work (in a different genre) of a literary icon, but is not worthy of recommending to those not already familiar with or fans of Louis L’Amour’s work.