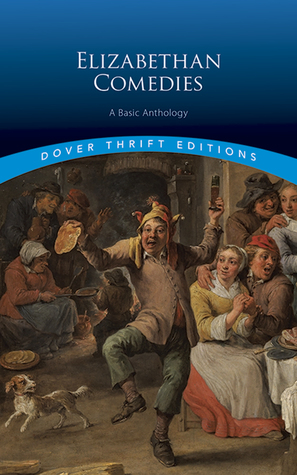 Anyone who knows me personally knows I have an interest in theatre. Working in theatre is how I spent the better part of my professional career. And ever since my college days, I’ve loved reading classical theatre (though I would have to say the ancient Roman plays have appealed to me the most).  When I saw that Dover Publications had this book, Elizabethan Comedies, available, I was quick to request a copy.

If you have an interest in theatre, chances are that you’ve seen or read a play by Shakespeare, but of course Shakespeare wasn’t the only person writing plays at this time. In fact, Shakespeare had a lot of competition (and associates) who were putting together some really quality, entertaining theatre. And you can see that right here with this basic anthology.

Personally, I would love to see more theatre companies, especially Shakespeare companies who are already well equipped to handle the dialogue, would put on some of the other Elizabethan comedies.  I don’t need to see another conceptualized version of Taming of the Shrew when I’ve never had a chance to see Ben Jonson’s Every Man in His Humour.

Each of these is well-deserving of being included in this volume and each of these is a really fun read.  We know for our Shakespeare studies that ‘comedy’ doesn’t necessarily mean laugh-out-loud funny, but these six plays are generally comedies in our more commonly accepted definition.

I enjoyed the Ben Jonson plays the most, but that’s probably no surprise since they seem to be retellings of some of the classic Roman plays.

It is interesting to note that at the end of Every Man in His Humour is the note:

This Comedy was first acted in the year 1598.
By the then Lord Chamberlain his Servants.
The principal Comedians were
Will. Shakespeare.
Ric. Burbadge.
…

And before I get emails … I know that most of these plays aren’t really in the Elizabethan era.  Please note that I didn’t title this book. I do realize, though, that a book about Jacobean Comedies probably wouldn’t get nearly as much attention.

Looking for a good book? Elizabethan Comedies: A Basic Anthology by Dover Thrift Editions is great collection and the perfect way to enjoy some theatre other than Shakespeare, from this era. This is highly recommended.