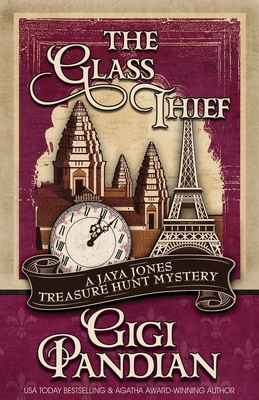 Jaya Jones is back in action, and I couldn’t be happier!

Even a well-known history professor and adventurer such as Jaya Jones has her own heroes, and one of Jaya’s is author Rick Coronado, whose tales of adventurer Gabriella Glass were inspirational to Ms. Jones. Coronado hasn’t written a book in seven years and word is that he’s been missing for the last few weeks.  But one day Jaya gets a large envelope in the mail. It’s the first chapters of a new Gabriella Glass novel that Coronado is writing, called The Glass Thief. Coronado is asking for Jaya’s input on his manuscript. This is unusual, but Jaya is thrilled to be reading her literary hero as the story is unfolding.

It doesn’t take long, however, for Jaya to read between the lines of Rick’s manuscript to understand that he is asking for Jaya’s help. Delivering on that help will first mean figuring out where Coronado is and then what sort of trouble he is into.

In the meantime, Jaya is also mentoring a couple of her students who think they’ve found a letter, written during the Gold Rush days, tucked between the pages of an old book.

Gigi Pandian really understands her characters. That should seem pretty obvious – that an author understands the characters that they’ve created – but too often that’s not the case.  But in the two different series that I’ve been reading by Pandian, I’ve noticed that her characters, aside from being smart and wise and bold, have grown over the course of the books.

The mystery itself is well defined – and also grows.  First it’s wondering who’s sending the book chapters, then it’s wondering what’s in them that is so important, and then it’s solving that mystery. It’s a complex story cleverly disguised as a simple cozy.

And then there’s the setting.  All of the settings in the Jaya Jones mysteries so far have included some unusual or unique locations.  A haunted mansion in Paris? Definitely!  A Pandian clearly does some great research to present these so well to the reader.

There are a lot of well-written mysteries on the market, but Gigi Pandian’s Jaya Jones series is one of the smartest.

Looking for a good book? The Glass Thief by Gigi Pandian is a tremendously good read.  It is the sixth book in a series and you should read them all.