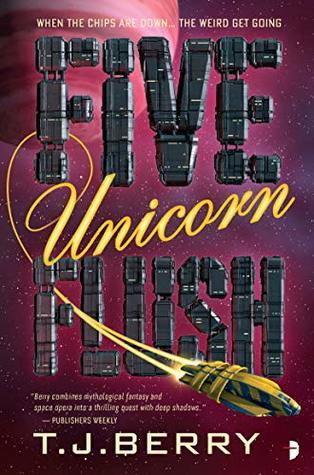 The Bala are a race commonly referred to as ‘Space Unicorns.’ They have tremendous healing abilities and their unicorn horns are the only known means to power faster-the-light-speed ships. So of course humans have hunted the Bala nearly into extinction. It’s pretty hard to hunt something to extinction when it can practically resurrect itself with its healing powers … but the intergalactic beings known as ‘Reason’ are doing just that.

Gary Cobalt is one of the last known Bala and he has taken a small group of remaining Bala to hide out on a remote planet to try to stay out of sight of the Reason. But there’s dissent among the Bala which could completely derail their chances of staying alive.

Cowboy Jim is a pilot with the Reason, flying the last FTL ship and he’s searching for the Bala so as to enslave the entire race.

Only one person can possibly bring peace to the galaxy, but is Captain Jenny up to the task?

As with the first book, I really like the way author T.J. Berry takes a kind of goofy idea (unicorns in space) and makes a fast-paced space opera that really catches the reader’s attention.

It may seem a little strange that one of the driving forces of the book is a political action, but the pending civil war – among a group of enslaved and hunted beings – is really fascinating. As a reader I immediately took a side and couldn’t understand the opposing views. Which had me thinking about current politics.

There is still plenty of humor here, but it is the growth of the characters that really makes this book worth reading. The assortment of characters, and the unique issues that each has (a unicorn with PTSD, a pilot in a wheelchair, LGBTQ issues), really helps this book stand out as character-driven space opera.

Looking for a good book? Five Unicorn Flush is the second book in the “Reason” series by T. J. Berry and is better than the first and shows that this is developing into a fun-to-read space opera series.