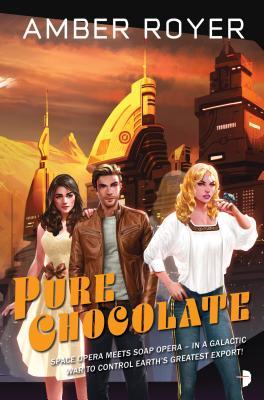 Bo Benitez doesn’t hold a grudge. She is currently visiting the planet Zant, which is home to the aliens who recently tried to eat Bo. But she’s a holo-(television)-star and this is great for her image, even if it’s really hard for her to do.

But things only get harder for Bo as she learns that Earth has been exported bad chocolate while at the same time getting the rest of the galaxy hooked on the sweetened, refined cacao.  Should she go public with the news?  She’s already in the hot seat with so many different people and companies. Or should she just keep smiling and play the game she’s paid to play?  But when a new threat appears she doesn’t have much choice as to what she must do next.

This is the second book in a series and I was only mildly interested in the first book.  This volume, however, steps it up a notch with the characters and action.

The characters were a little more clear to me, and the relationships stronger. And while it only bothered me a little bit in the first book, I thought the blending of English and Spanish was better here. And I still really love the fact that this is a Latina protagonist – it just makes a lot of sense.

Like the first book, there is a lot of ‘out-of-the-frying-pan-into-the-fire’ action here. It’s non-stop, which is what you would expect with a space opera.

And still … there’s something here that doesn’t connect with me. I want to like this.  I live the general concept and the characters, but I still don’t feel drawn in to the story. it’s getting better, but still not there.

Looking for a good book? Pure Chocolate by Amber Royer is the second book in the Chocoverse series and better than the first, but still not quite sweet enough for my palette.

I received a digital copy of this book from the publisher, through Edelweiss and Netgalley, in exchange for an honest review.