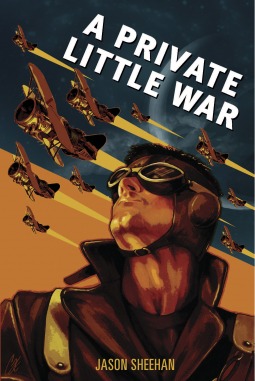 A group of aviators have formed their own company, known as Flyboy, Inc.  They’ve landed on an alien planet and have completely devastated everything natural to the world.  They’ve exploited and killed the natives as the tried to rebel against these alien invaders, and they’ve ravished hundreds of millions of terrain.

It was supposed to be an easy mission for the mercenaries – with support from the ground and a private military organization – and it was going to make the Flyboys extremely rich. But the indigenous people had other plans.  They weren’t going to roll over as easily as the Flyboys expected and the easy mission became a long, drawn out affair that might not ever have an ending.

Unless you are a fan of WWI-era dogfight fiction in a science fiction setting, this is a book to ignore.

First, this is full of warrior machismo. It’s slap-on-the-back buddy stuff.  It’s gear-head military fiction with plenty of descriptions about how things work (though surprisingly it’s all based on World War I styles and mechanics despite being set in the future – which was honestly just really confusing).  There’s some rough, macho sex (“The sex hadn’t been nice. there’d been nothing friendly about it. it was rough and it was hard and that’d been fine. it’d been good because that was what he’d needed and she’d wanted and, so, what she’d taken from him.”) and even the simplest descriptions are militaristic (“Under his hand, Cat’s body was warm like a gun.”). And there’s death and destruction.

Lots of death and destruction.

Really this book is just a morass of stupid slaughter.

None of the characters in the book stood out as someone worthy of caring about.  I didn’t care about the characters – they were in this to get rich – and they were all cardboard stereotypes of 1930’s era pilots.