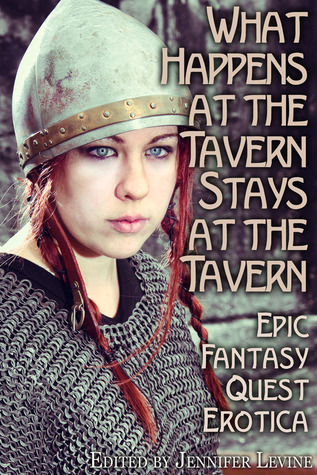 Erotica.  Epic fantasy (ala Robert E. Howard, or Lin Carter, or J.R.R. Tolkein). Encounters in a tavern.  What’s not to like?

I’ve only read a little bit of erotica and most of it has not been very memorable. This caught my eye because of the fantasy element.  I’ve been a fan of this kind of fantasy (we used to refer to it as Sword & Sorcery) since I was in high school, though I haven’t read much in the genre recently.

The focus here is really on the erotica and the tavern/fantasy element is really just a gimmick to write some sex stories. … But that’s okay, because it works.

It’s a thin book at just over 125 pages, and there are only six short stories included here, but if you enjoy erotica, or are even curious about it, and you also enjoy fantasy books, then consider giving this a try.

“Orin’s Strand” by Vivien Jackson : Possibly my favorite story in the collection.  A ‘seer’ knows how to use her body, combined with her powers, to attract and hold a lover.

“Paget and the Princess” by Kierstin Cherry : This felt a bit obvious.  A knight is sworn to protect the virtue of a princess, but can’t resist her himself. The attempt to make this unique by creating more of a fantasy background for the characters doesn’t really help.

“The Place Where Heroes Are Made” by Sarah Ellis : This was interesting and clever.  A family-run tavern with a long history of serving and servicing the wandering warriors with every possible sexual delight so that the doomed warriors won’t leave the earth childless.

“Crystalline Sorcery” by Julie Cox : A female warrior has experienced battle as a man would, and now wants to experience sex as a man would. This story features female/female sex as well as human/elf sex (is that a taboo?). Actually a pretty clever story and well done (I’m a guy, and the lesbian angle didn’t bother me the way the male gay sex story did).

“Flings and Arrows” by Andrea Trask : We follow Alleria, a woman who just might be able to fulfill a noted prophecy.  But to do so, she must be a virgin. Is she?  Can she stay that way? This story builds up sexual tension.

Looking for a good book? If you want to test to try reading erotica, and you like the heroic fantasy settings in your fiction, then you should check out What Happens at the Tavern Stays at the Tavern, edited by Jennifer Levine.