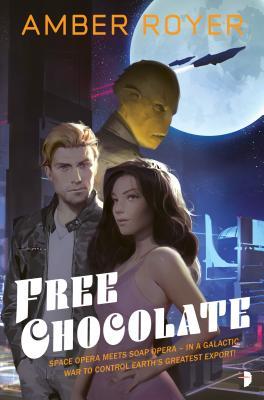 The universe is full of aliens and the tiny planet we call Earth has only one export of any value … chocolate. And when chocolate is a hot commodity galaxy-wide, someone who knows how to work with it will be in demand.

Bo Benitez is a culinary arts student but she becomes a criminal when she steals some cacao plants from a well-fortified plantation.  There are some in the galaxy who think that chocolate should be made available to anyone who wants it and not controlled only a few. Bo agrees, but now is being hunted for her theft of the valuable chocolate plants.

Along with her boyfriend (from another world) and a alien, reptilian cop, Bo escapes on an unmarked starship.  This should be good … except the starship is owned by an alien race that eats their stowaways! It doesn’t seem like things could get much worse for Bo and friends when Bo learns a secret about a threat against the earth.

The premise here is really fantastic.  Having a galaxy-wide export that really is something that is likely unique to our earth makes a tremendous amount of sense.  And having our protagonist as someone who is learning to work with that commodity also makes sense.

But the execution of this great idea is just a bit clumsy.

Bo Benitez is mostly a good protagonist here. That she is a Latina is also a really nice idea – I can’t think of too many Latinos/Latinas that are leading characters in modern sci-fi/fantasy. But this book tries to do a little too much.

We’re introduced to a world in which there are vast numbers of aliens, but life on Earth doesn’t seem too different from what we experience today. It’s only when Bo gets off planet that we get a sense of how different this world and this time is. This is rather a big and abrupt change – the world-building here just isn’t smooth.

Aliens who eat their stowaways.  Okay.  Is this a completely foreign concept to Bo and the cop?  Or was this something they knew might be a possibility?  Either way, we don’t really get the right reactions and the behaviors of our protagonists just don’t really add up.  And frankly, I’d like to have seen more actual work with the chocolate … they way we were set up in the early chapters.  Perhaps, though, we will see more of that in later books.

I’ve looked through the other responses to this book on Goodreads.  Many people are really put off by the author’s use of a mix of English and Spanish. While it did bother me to some degree – mostly because I don’t speak any Spanish – I thought that a book, set in the future, with a Latina protagonist, absolutely should have a mix of Spanish and English!  Our language changes all the time and it seems perfectly natural that we’ll evolve into a blend of Spanglish sometime.  Still…it doesn’t make for any easier reading.

There’s a great idea here, with an interesting leading character.  We just need a little tighter writing and editing.

Looking for a good book? Free Chocolate by Amber Royer has promise and potential with many good things going for it, but it falls just a little short of being a recommended read.