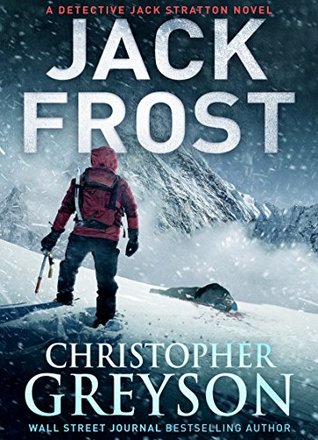 This is my first foray into the Jack Stratton detective/thriller series.  This is the seventh book in the series and the ratings on Goodreads are quite stellar, so I was really looking forward to this.

Jack Stratton is an ex-military, ex-police, private detective. Along with his fiancee Alice Campbell, they run a detective agency which takes them all over the globe.  Currently, they are being contracted by a television program called Planet Survival – a Survivor-like ‘reality’ show. Jack will go undercover as a local hire on wintery Mount Minuit as a crew member.  Already a sound man has been killed, and the show has been receiving threats – likely from natives and/or environmentalists who aren’t happy that Hollywood has invaded their pristine territory.  But of course the show is so successful that postponing production or going elsewhere is completely out of the question. The weather on Mount Minuit is as unpredictable as the killer, and if the killer doesn’t get Jack and crew, the weather might.

Despite being the seventh book in a series, this book stands alone nicely.  Author Christopher Greyson does a fine job of filling in the necessary background information without slowing down the initial story too much.

The characters were interesting – Jack is, of course the most finely fleshed out, but given their history (ex-military, ex-cop, in-demand PI) it’s a bit ridiculous to think that they are really only in their 20’s. Still, it’s an action/thriller and there’s some willing disbelief necessary to buy in to the action.

Early on, Jack has to try to fit in with the crew and prove his value and that he’s local.  He does this with a snow-mobile race, choosing the most dangerous path, and managing to save his opponent from being beheaded by a recklessly placed wire.  Or was it an intentionally placed wire?

I was hooked and interested at this point, and then the book lost me.

As with many thrillers, each step of the way was paved with dangers and each danger had to be more threatening and dangerous than the last.  When a building blew up and Jack and another man were on the run through the snow, and the explosion caused an avalanche that nearly buried the pair, we were barely a third of the way into the book.  How do you top an explosion and an avalanche?  With red herrings, apparently.  But these red herrings weren’t just hints and suggestions, they were outright statements (“I think so-and-so must be guilty”), an attempt to find the connection of guilt to the named party, only to realize it wasn’t that person after all and on to the next.

You could, of course, figure out who was going to be the criminal based on who wasn’t being named.

Despite the attempts of action on top of action sequences, I grew bored with the book and ultimately didn’t really care. Jack was more action hero than detective, and I’ve not really been impressed with action hero characters. Alice seemed to have the most interesting story (on-going), but she played a more background character here.

I definitely wanted to like this more than I did.  It turned out to be a pretty stereotyped action hero and it reads more like a wannabe movie series than a detective or even thriller book series.

Looking for a good book? Jack Frost by Christopher Greyson is a detective/thriller book that relies on a stereotyped action-hero character and a lot more luck than skill at detecting.