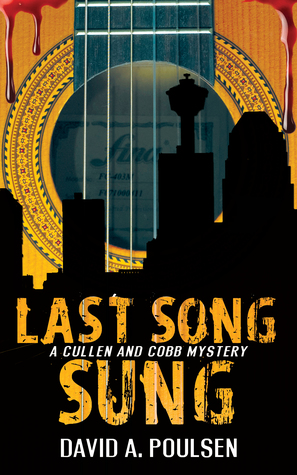 It’s always a gamble to pick up a book in mid-series these days.  Sometimes a story relies on the reader’s prior knowledge of previous books and sometimes you can jump right in and get everything you need through the course of the story.  David A. Poulsen’s mystery, Last Song Sung, falls somewhere in between.

Freelance journalist Adam Cullen and cop-turned-private detective Mike Cobb are hired by a young woman to track down her grandmother.  The problem … the grandmother, Ellie Foster, disappeared 50 years ago.

Ellie had been a rising star in the music scene in Calgary during the late 1960’s.  One night, during a ruckus in which gunshots happened, Ellie went missing and there had been no sign of her since then.  But recently her grand-daughter found that someone had broken into her car and left a CD with a previously never-before-heard recording of Ellie.  Could Ellie still be alive? Why else would her once-missing music start to turn up? Cullen and Cobb’s search reveals some unexpected political tie-ins.

It’s pretty common for me to gravitate toward a book with some music theme and that’s what initially drew me to this book. That music theme doesn’t play as central a role as I had hoped, but I quite enjoyed this read none-the-less. The story built up nicely and the mystery adds layers and reveals bits of information at a nice pace.  It was easy to be hooked on the story and want to read just one more chapter each time I sat down to read.

The book is written in first person, from Cullen’s point of view.  This makes a certain amount of sense since he is a journalist and tells a story, but I would have liked getting the detective’s insight through more than just table talk.

This story, of Ellie Foster, is clear and concise and we get everything need to follow this story, and we learn a bit about Cullen and Cobb along the way.  But there is also another story that is running in the background – something that clearly began in an earlier book and is not yet resolved.  This was a little bit irksome since I wasn’t familiar with it, and some of it feels important enough that I should know more.  Though it is an interesting bit of character and plot development. I’m not likely to go back and read the first couple of volumes, but I hope more is explained if I should read future books.

Looking for a good book? Last Song Sung by David A. Poulsen is a fun, modern mystery that looks back at a fifty-year-old incident. This is great for mystery and cozy mystery lovers.