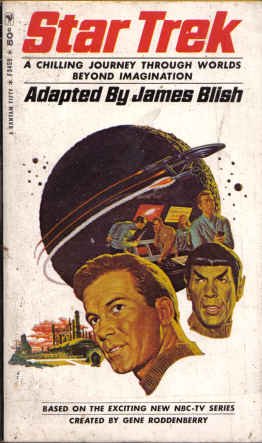 I first read this book in the mid-to-late 1970’s. I was an early Trekkie.  Youngsters today forget that there was no Netflix or Hulu or DVRs and we watched our favorite shows when they were being broadcast, and shows like Star Trek you could only see if your local station purchased the syndication rights.  And it’s because of this, that fans such as myself practically devoured anything we could find that would help us enjoy these characters and their adventures.

This was one of (perhaps the) first books to give fans a chance to relive some of the adventures.  Author James Blish adapted seven episodes into stories to be included in the book.  In many cases, his adaptations came from scripts – and not always the final version as it appeared on television.  Even some of the titles don’t line up exactly as we might otherwise recognize them from the screen.

What this does, however, is give us a little sneak peek at some character motivation as well as how a story sometimes changes while in the filming process.

Reading these again was mostly a nostalgic trip back in time to my early teen (even pre-teen) years as a geeky Star Trek fan. Where I once really cherished the chance to read these adventures, I now found the stories to be too short and really lack any depth of character. If Blish was writing these based on scripts and hadn’t really even seen the episodes, it makes some sense that he doesn’t quite pick up on the personal connections and the relationships.

Think about this … there are seven hour-long episodes here in story form, in a 137 page book. There really isn’t much here.

I did make me think however, how much I might enjoy having a popular author or two re-imagine these episodes in more detail.  A series of novellas?  If the price were right I could see myself buying them!

This book contains the following stories, based on the episodes:

Looking for a good book? If you’re a Star Trek fan, consider revisiting Star Trek 1 – short stories based on early episodes, by James Blish. The adaptations don’t stand up too well, but the nostalgia is fun.