THE FUGITIVE AND THE VANISHING MAN – Rod Duncan 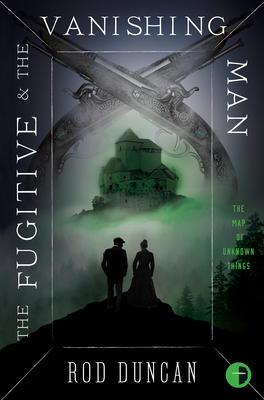 ***WARNING — POSSIBLE SPOILERS AHEAD! READ AT YOUR OWN RISK***

Oh, wow. Rod Duncan wraps up the Elizabeth Barnabus series with a tale that is wild, tight, beautiful, and heart-wrenching in so many different ways.

Elizabeth Barnabus, who, despite being an enemy of the Gas-Light Empire, is a strong supporter of the peace and stability that the Empire brings. Although she’s given up all the information she can to the authorities in the Patent Office no one seems to take her seriously.  She has seen first-hand what could happen if the Empire isn’t prepared and so she does what she has always done … take things into her own hands.

Escaping the Empire she heads into the wild lands of Oregon where a king is preparing for war. And this king has a number of aides on his side.   He has a powerful new weapon that can kill many enemies in just one squeeze of the trigger. And, among his many confidants, he has a magician – Edwin, the son of the previous magician who was killed when her prophecy turned out not to be true.  Edwin knows his time is short, especially since the king has another aide who will stop at nothing to get Edwin discredited and killed.

Edwin has one more trick that even he didn’t realize for the longest time.  Elizabeth is Edwin’s twin sister. Raised in a circus family performing magic tricks, and with Elizabeth having spent much of her life pretending to be her brother Edwin, the two might be able to perform, for one last time, the Vanishing Man trick and stop a war and save their own lives as well.

Raised by a different parent and in a different land, Elizabeth and Edwin don’t exactly see eye to eye.

This story is just … wow.

Although we’ve heard mention of Edwin throughout the series as Elizabeth (when she’s dressed as a man she refers to herself as her brother Edwin), I didn’t expect to actually encounter this sibling. And pulling in the magic that she and Edwin were raised on – the kind of magic that started this series – is some kind of brilliance.

Before I started this I had read or heard somewhere that this was the last book in the series. I don’t know if that’s true or not, and because I’ve been enjoying this so much I was definitely hoping that this would continue on. But about three quarters of the way through the book, I could see the end coming. And I was completely content.

Something about the way that Duncan pulled the pieces together had me feeling good about this series and the idea that we weren’t likely to get another Elizabeth Barnabus story. It was just feeling … right.

There are so many layers to this book that I’m sure that when I read this again I’ll discover even more.  The surface story – that story which is described as a blurb on book selling websites – is only the action that gets us from point A to point B. But the story of family is just tremendous. Though an absent figure in Elizabeth’s life, her mother and her mother’s leaving have been a source of frustration for some time.  And though we get to meet the mother (albeit briefly – and Elizabeth doesn’t), there is so much for Elizabeth to come to terms with.

And alongside this learning about family, she also has to face her thoughts on politics and governance. There is a system which hasn’t treated her well over the years.  A system she herself tried to disrupt. But she finds herself defending this system when confronted with something very different and very aggressive.

One of the most interesting characters here … and someone I suspect we may see again in another book (either a Fall of the Gas-Lit Empire series or the Map of Unknown Things series [or a combination of them]) – is the strange woman being held prisoner by the king simply for refusing to recant her declaration that there is no such thing as magic. Elizabeth becomes obsessed with her strength and integrity for refusing to even just say the words without meaning it in order to gain her freedom. Elizabeth will see to her escape – thereby freeing herself (metaphorically) as well.

This is easily one of the best series I’ve read (with only Roger Zelazny’s Amber series being in the same grade) and this book just made me feel good.  I don’t know that I’ve ever had such a feeling of peace at the end of a book … but it took a lot to get us there!

Looking for a good book? The Fugitive and the Vanishing Man by Rod Duncan is a tremendously superb book that (perhaps) closes the cycle of Elizabeth Barnabus stories. Please read the entire series!

I received a digital copy of this book from the publisher, through the publicist, in exchange for an honest review.

The Fugitive and the Vanishing Man

series: The Map of Unknown Things 3