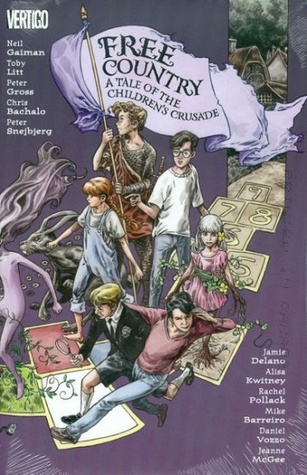 I typically think that Neil Gaiman has the Midas touch when it comes to comics and graphic novels so when I saw his name on this book I put in a request for it, even though I knew nothing about the background of the book or the characters.  I discovered some of that a bit later.

Apparently, at one time, Gaiman had written a couple of books for publisher Vertigo using characters from some of his other stories. Specifically the dead boy detectives that had been in his Sandman series. Those two books were then put together and some additional material was written to tie the two books together.

The Dead Boy Detectives (DBD) take on a case, brought to them by a strange girl, who insists on joining them through their research.  Several local children have gone missing and the DBD wind up in Free Country – a land where no child ever grows old and there are no adults to condemn or abuse them. (Wait a minute … isn’t that Never Never Land where Peter Pan lives?  Anyway ….) But Free Country is falling apart. Can the DBD save this land?  Should they?

Creatively, this is an interesting idea, despite the obvious correlation with Peter Pan. The different characters are interesting but we never get to know them. This book strangely balances character development and plot by not fully exploring either.  This jus doesn’t feel like a Gaiman story!

I note that someone else, in their review, has written that the book is over-written and I would agree whole-heartedly.  This book is packed with text. Typically when I read a graphic novel I absorb the art as I read only occasionally spending extended time on a panel of art if there is a lot of action going on that is subtext to the text and dialog.  But here the art never seemed to be a part of the story, or a complementary method of telling the story.  It seemed more like a picture book.  Story. Art. Read the story and then look at the art – it won’t help tell the story – it’s just there to be pretty. And even then … it wasn’t. Pretty that is.

The artwork is as chaotic as the story, and not helped by the fact that there are texts boxes and dialog balloon everywhere.

This was a massive disappointment and I think I’d much rather read a Gaiman novel.

Looking for a good book? A Take of the Children’s Crusade: Free Country is a graphic novel that is confusing and difficult and not really worth the trouble.  Gaiman devotees may still want to experience this.

A Tale of The Children’s Crusade: Free Country