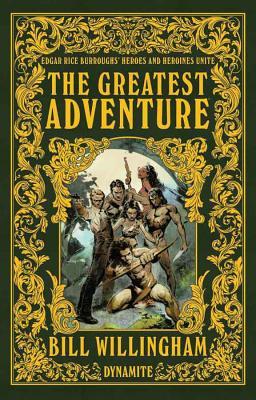 I recognized Bill Willingham’s name from the hit graphic novel series Fables and combining him with the heroes and heroines of the Edgar Rice Burroughs books, I was sure this was going to be a real blast.

There are a LOT of Burroughs’ characters here.  Well…I assume they’re in the Burroughs cannon – I didn’t recognize many of them.  Like many, I am most familiar with Tarzan, John Carter, and Carson of Venus.

Picking up the theme of Jason and Argonauts, where a group of heroes band together on a quest (a hero version of a musical super-group), Jason (!) Gridley gets Tarzan, Jane and soon a large number of like heroes to join him on his Martian skyship, Venture, (where Tarzan is the captain) and they head off to save the world from nasty villainy.

Yes… just as described above, this is pretty much just a Burroughs-era pulp adventure story, only everything is thrown in.  And therein lies the problem.  There are too many people trying to vie for attention in this story and since I didn’t know many of them, I tended to get lost.

The art doesn’t help anything here.

In general, the art is pretty decent – except the long-haired heroes all look exactly the same!  When Tarzan and John Carter are in the same panel (which is often) you really have to study the panel to make sure you know who is who (if you care to know).

I really wanted and expected to like this book, but instead it just really ‘blah’ – not horrible, but not the exciting book it should have been, given the talent behind the story and the characters lifted to tell the story.

Looking for a good book? The Greatest Adventure is a graphic novel written by an experienced, talented hand (Bill Willingham) using classic heroes from the pulp era, but the book doesn’t soar the way that it should.